Inbreeding the Curse of Big Cats

- February 25, 2009
Inbreeding is the curse of big cats in captivity. And it is in captivity, that increasingly they are to be found. We kill them in the wild and kill them indirectly in captivity. The poor big cat is in the wrong hands. He should steer clear of humans. He tries to but there are too many of us.
I am talking here, specifically, of a report from India but other big cat reserves will have similar problems, I am sure. How can we breed with diversity when there are so few big cats around? Inbreeding is a perenial problem with all cat breeders, wildcats big and small and domestic cats too. In respect of domestic cats the problem of inbreeding arises because of the desire to improve "type", the appearance of the cat.
There is competition to produce the most desirable cats for purebred domestic cat breeders. The same goes for dogs and it is worse in the dog world. The famous Kennel Club in the UK being a good example of what can go wrong over time when overbreeding or breeding for an exteme appearance is allowed to continue unchecked (see Purebred Pedigree cat breeding, for example). 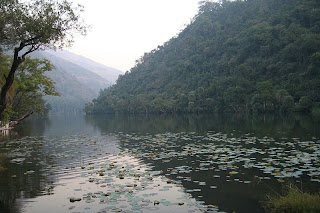 Renuka Lake, the site of the Renuka Safari park for lions. Photo published under Wikimedia® creative commons license license = Attribution-ShareAlike License But for the Asiatic lions of the Renuka Lion Safari park the inbreeding leading to premature death though illness has come about, it seems to me, because the whole enterprise started with a pair of Asiatic lions, a very rare cat indeed in the wild, and the breeding program probably allowed breeding back to parents (offspring to parents) or offspring to offspring and so on.
This is classic inbreeding as far as I am concerned and we are on dangerous ground when we do this in terms of health. The immune system historically becomes weakened and we can even produce deformed lions. And believe me there is nothing more sad and bad than a deformed lion, one of the most handsome animals in the world, usually. The location of the lion reserve can be seen on this map:
At the Renuka Lion Safari, 59 Asiatic lions has been lost to diseases and abnormalities due to inbreeding, which in turn was brought about by a defective breeding program, it has been decided. The dead lions include 33 cubs who died between 1981 and 2001. The causes of the more recent deaths were put down to heart failure, lung-congestion and asphyxia.
Breeding has stopped at the sanctuary. I guess that is the end of the Asiatic lion at the sanctuary. What now breeding of big cats? Why did it happen over such a long time? Inbreeding the Curse of Big Cats. See also India's Project Tiger and Genetic Diseases in Purebred Cats. One last point, the cheetah is inbreed (see endangered cheetah) but it is believed this happened thousands of years ago and finally the Florida Cougar, due to it's isolated habit is also inbreed, jeopardising its survival. Source: http://www.thaindian.com/
big cats cat breeding human behavior Lion Wild cats