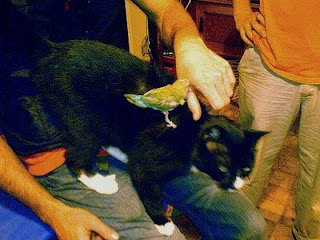 The domestic cat kills 16 animals a year, so say research scientists at University of Reading, UK. As there are an estimated 626 domestic cats per square kilometer that makes 626 times 16 animals killed by cats every square kilometer per year. The figure is 10,016. This translates to 92 million animals a year, of which 27 million are birds so the researchers say. How accurate is it?

There are some estimates and uncertainties (to me) in this:
There has been a constant argument about the impact of the cat on native wild life none more so than in Australia, where the feral cat is persecuted for killing native wildlife (once again on the basis of disputable analysis). See Savannah cat ban and feral cats of Australia, for example.

The next job for the researchers is to track the cats over their territory using GPS devices to see how far they roam. This research, as I understand it, relates to "family pets" or a better description would be companion cats. If that is the case the figures would be very different in the United States as the majority of domestic cats in that country are full-time indoor cats.


Er, um, what did you guys say the domestic cat was doing to wildlife?

It was felt after the research that the domestic cat was responsible, at least in part, for the 60% decline in the sparrow in Britain since the 1980s. I am not sure that this research will finally clear up the argument of the domestic cat's impact on native species. The biggest factor for declines in wild life will certainly be from our activities. This was taken into account by the researchers in making estimates but I wonder how accurate they are when they say that the domestic cat kills 16 animals a year?