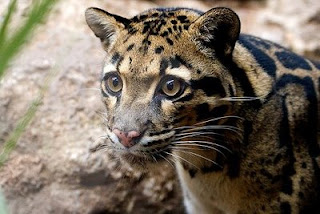 Clouded leopards are so named because of their cloud-like pattern (see picture below right). This is a truly beautiful animal. It is why it is assessed as threatened by the IUCN Red List (population is estimated at 10,000 adults) as people want a piece of it. This wild cat is banned under the Conven 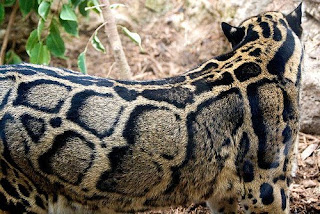 tion on International Trade in Endangered Species of Wild Fauna and Flora (CITES). This is intended to stop trade in body parts of this cat. I am not sure that CITES is that effective though.

This is a relatively small wild cat. We might get the impression that this cat is similar in size to the well known tiger, for example, as it looks similar. Yet it is a fraction of the size weighing 25-50 lbs. The tiger is the largest wild cat species weighing 397 - 569 pounds for the male. A well known large domestic cat the Savannah or, in fact, the Maine Coon can both weigh in the order of 20+ lbs. That gives us a clue as to size.

This video shows the size very well and the tame nature of this cat when in captivity and socialized:

Clouded leopards are tree cats, great climbers. They might be the best of all climbers amongst the cats. They have large and long tails to act as a balance and their large paws help with grip. A necessity when 50 feet above the ground. Another special thing about the clouded leopard is that is has the longest canine teeth of all the cats. They are 2 inches in length. The range of this cat can be seen in the map below: 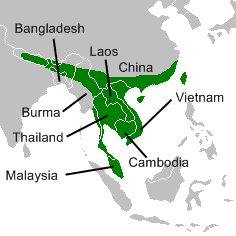 Map published under Wikimedia® creative commons license license = Attribution-ShareAlike License. The area shows parts of Asia. On the left (gray) is India and to the right Cambodia, Vietnam and South China is painted green.

On occasions clouded leopards have been domesticated. They modest size makes this practical, at least, in theory. But there are numerous issues is domesticating wild cats not least of which is the legalities (see Serval cats for some legalities) and moralities. Next would be a correct environment and that means trees as this cat is, as stated, a climber and needs trees to feel comfortable. 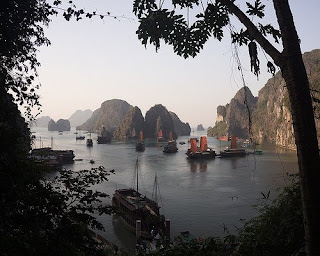 Vietnam, a country where this cat is found - photo by `◄ccdoh1►

Apparently clouded leopards are difficult to breed in captivity as the male tends to attack the female. This cat's habitat is:-
In Borneo the clouded leopard is considered a separate species. In Borneo they have been photographed by camera traps in the Sebangua National Park, which can seen in this map: 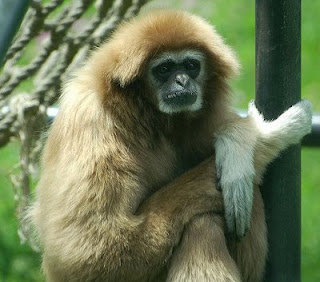 The overriding feeling that I have regarding this cat is awe and sadness. Awe at its beauty. The markings are perhaps the most striking of all wild or domestic cats, in part because of the heavy contrast between pattern and ground color (background). Sadness, because it is its beauty that has almost destroyed it. People like to "own" beauty or get something from it in some kind of way, which includes killing the animal for the pelt, for example. We truly do find it difficult to live side by side with our wild cats and to respect them.

Photos are all published under creative commons license:

-- Photo of clouded leopard coat (back) by fuzuoko.