The cat abscess is more common amongst feral cats. Timmy the stray cat we feed and care for has got into several fights. Feral cats will do this, particularly male cats (see Cat Fights of Male Cats). Fights lead to scratches and tears around the head, shoulders, ears and legs. I knew that Timmy had got into a fight because he has small scratches on his skin in these places. But an inspection did not reveal anything big or troublesome. Then I saw a small scratch on the back of his head and a small patch of hair missing. I thought for a while that this was ringworm as it looked a bit like it and he has given me ringworm (it is a zoonotic disease, a fungal disease in fact - see cat ringworm). 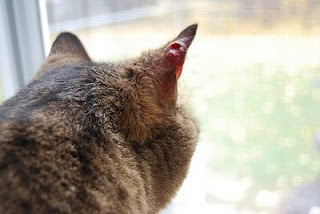 Cat abscess on ear recently treated (drained and medicated) by a vet. This is not my cat as I was too concerned to photograph Timmy at the time, racing around to a vet and being concerned that he wouldn't cooperate as he is a feral cat etc. Photo by appaIoosa. The cat in the picture is called Tabitha who got the damaged ear in a, yes, you guessed it, fight.

Anyway, the next day the area under the skin where the scratch was had become hard and swollen and I knew he had an infection, a cat abscess. I could have done better, though, as an infection from a puncture wound from a cat fight can be prevented if proper care is given with the first few hours. One of the problems with this feral boy cat is that he is just that and he comes and goes. So I cannot act quickly as he is not here. He may also "belong" to someone else. I just don't know.

Well I took him to the vet and he was treated (see the full story of this and update by clicking on the link above or here: Cat Fights). This then is what happens when there is a cat abscess:
Update 10-3-2010: About one year after the abscess described on this page he got another one. Here is the story in a video:


A stray cat gets into a fight and gets an abscess from Michael Broad on Vimeo.

Treatment for cat abscess:
The Cat Owner's Home Veterinary Handbook states that the infected cavity of a cat abscess should be flushed with dilute Betadine solution or a dilute hydrogen peroxide solution (one part to five). The antibiotics, the book says are usually, penicillin, Keflex, Tetracycline or Chloromycetin.

I am yet to see Timmy since he went out yesterday. I couldn't keep him in. But see update below. 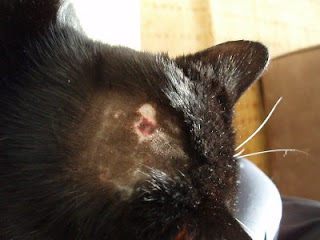 Update: 6 hours after I wrote the above, Timmy came in. This shows Timmy's wound after going to the vet and one day later. I gave him his antibiotics in his food and washed his wound with salty warm water. He was a good boy and ate well. I was pleased to see him. The cat abscess looks a lot better. It is dry and hard but there is still some puss underneath. I hope it will go with the antibiotics.

Update: Timmy made a full recovery, the antibiotics working efficiently and his abscess disappeared in about a week. His hair grew back in about two months. Timmy still comes around, still eats like a horse and stays a while sometimes. If I moved home I would have to take him with me as he is part of the family; only beforehand I would put a collar on him with a message asking the owner (if he has one) to come forward.

Here is a video about cat abscesses: