Lynx is Hunted in Romania

The lynx is hunted in Romania with the consent of the government. The figures present the lynx population as healthy at over 2000 in 2001 (the last date figures are available -this seems strange?). The figure is an "official estimation" and to me is seems dangerously low not healthy. According to the website, www.kora.ch, the data is inconsistent. I presume that this is data from the Romanian government. It says that there is a clear need to improve the consistency and transparency of data. Note: the lynx in Romania is the Eurasian Lynx.

I have to ask then, how can an assessment be made as to whether it is viable to hunt this wild cat. For myself, I would ban hunting whatever the figures. There is no need to hunt today. It is cruel and outdated. But when the government has its latest figures up to 2001 and even these old figures are unreliable then the most pro-hunting person would be hard pressed to argue that hunting of the lynx should take place until a proper analysis and assessment has bee 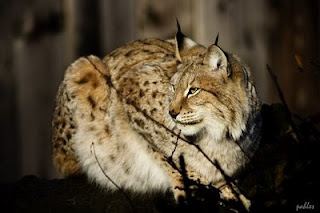 What I find odd is that the government allows 250 lynx to be shot. Yet the actual figures of shot lynx are extraordinarily low at, for example, 13 in 2000. Can these figures be accurate? I personally doubt it. There is no doubt that a far bit of money tied up in the sport of lynx hunting and I am pretty sure some of it finds its way to someone in the government, who like to keep the figures looking very healthy and in favor of hunting until of course it can no longer go on due to the extinction in the wild of this animal.

What is depressing for me is that it is probably these unreliable figures that are used in the IUCN Red List of Threatened Species™ when they assess this cat as LC (Least Concern) (see IUCN Red List for Cats). The IUCN Red List is a great tool in conservation but I am beginning to doubt its accuracy and its achievements. We see the gradual extermination of the wild cat it seems to me.

The Eurasian lynx inhabits the Carpathian Mountains. Wikipedia says that "about 2,800 lynxes live in this mountain range". That is a more recent estimate and it covers an area beyond the Romanian borders into the Czech Republic, Poland, Slovakia and Serbia. This estimate would indicate small numbers in Czech, Poland, Slovakia and Serbia. It is plainly guesswork and it is time to reconsider. Yes, the lynx is hunted in Romania and probably Serbia too and the IUCN Red List and the governments of these countries should seriously reconsider this.

Another extraordinary point is this. The Eurasian lynx was extinct in central and western Europe by the 19th century. And yet we are still hunting this animal. Isn't it time to grow up and stop?

Photo of Eurasian lynx by pahles and published under creative commons license: