The Australian feral cat laws are gradually being developed (happily). I have talked about feral cats in Australia a lot, mostly in a critical manner because in Australia they do some pretty horrendous things in relation to the feral cat including shooting it on sight: see Ground Shooting of Feral Cats.

In Port Augusta, SA (see map above) the local authority has introduced compulsory microchipping and neutering for cats over 6 months old. This, at least, tackles the root of the problem as it is law that is focused on the people who keep companion cats rather than the cat her/himself. This is sensible. The big problem is how to enforce the law? This is a really tricky point. 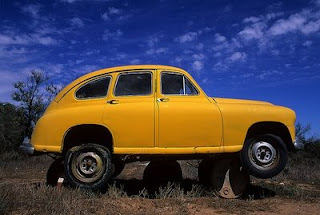 bled over the past few months. And Australians really do think they have a feral cat problem, hence the desperate measures of allowing shooting them in some states (which does not work in my opinion - see vacuum effect). Perhaps the rise in feral cat populations is because of the new laws? Has anyone thought of that? Or perhaps it is because of financial difficulties brought about by the world recession.

In order to try and make the law more effective the local authority has called an amnesty on penalties for breach of the law ($100 per cat per offense) by asking companion cat owners to come forward and surrender their cats if they have difficulty in keeping the cat. What does surrendering their cats mean? To me, a very cynical person (due to experience), surrendering a cat to the local authority will probably mean the death of the cat. Which cat keeper is going to allow that? That said, I like the fact that Australian feral cat laws are being enacted that attempt to tackle the root of the problem. The trouble is the "problem" has been left unaddressed for far too long and it is now almost impossible to resolve.