The cat pancreas has two main functions. The first function is to produce digestive enzymes. If the pancreas is not function properly and these enzymes are not being produced malabsorption syndrome could be the consequence. The second function is to make insulin. Insulin is used in the cat's body for the metabolism of sugars. If the production of insulin is inadequate it causes sugar diabetes in the cat.

Insulin is secreted into the blood circulating in the body. The insulin acts on the cells membranes, which enables the cells to absorb sugars. The sugars undergo a metabolic process resulting in the production of energy. Without this process the sugar is not metabolized and it remains in the blood. This causes hypoglycemia. The excess sugar is urinated causing increased urination which in turn leads to thirst and more drinking. 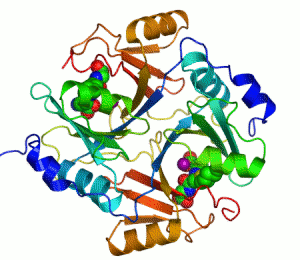 And enzyme is an organic molecule, the purpose of which is to speed up chemical reactions in the body. An important function of enzymes is in the digestive system of cats and other animals. Some enzymes breach down large molecules to smaller ones and some convert sugars to a different type of sugar and in both cases the food is better absorbed through the wall of the cat's gut.

Metabolism describes the chemical reactions that occur in the body of all animals that allow the animal to live.

See these post for lots more, please:
Lastly malabsorption syndrome - what is it? A failure to absorb food in the small intestine leads to loose badly formed stools. Cats with this condition are thin and obviously malnourished despite large appetites. The stool contains fats and it smells. The hair around the anus is as a consequence oily. A low fat diet is called for. (src: Cat Owner's Home Veterinary Handbook by Drs Carlson and Giffin - recommended)

From Cat Pancreas to Cat Health Problems
By Michael Broad at February 13, 2009