Ragdoll cats go limp when you pick them up. It's lies, I tell you, all lies...Well lets say it's a bit of fiction. Yes, they can, and some do, relax, when you picked them up but no more than any other laid back cat and there are many cats like that. For instance I have a stray cat friend, Timmy. He is a complete cutey when it comes to picking him up, combing him or prodding him to check his health (good by the way). It is just his character. Ragdoll cats are generally known to be a laid back breed of cat but one cannot generalise about cats, humans or any animal as there will be individual characteristics which will override any background character. 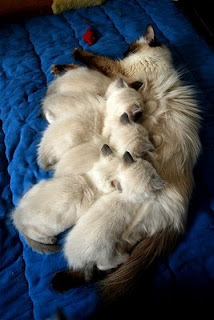 Ragdolls I guess are laid back but there are a number of mysteries surrounding this breed of cat. This is probably because of the originator of the Ragdoll breed, Ann Baker, seems to have surrounded the early years in a bit of mystery, perhaps deliberately. Even the experts have to admit that the exact circumstances of the origins of this breed are vague. It wouldn't be the first time an origin of a breed was vague, though. For instance Gloria Stephenson in Legacy of the Cat, a fine book, refers to four different versions of the origin. You can see my detailed version on the Ragdoll Cat Information page.

So, Ragdolls are generally calm, docile, quiet cats and, of course, easy to handle. They would seem to be the ideal indoor-all-the-time cat, the modern cat really. Gloria makes a good point. Bearing in mind their size (they are the second largest on my reckoning amongst the genuine domestic cat breeds - excluding the wild cat hybrids - see largest domestic cat breed) it is lucky that they are docile and have sweet dispositions! Ragdoll cats go limp sometimes.