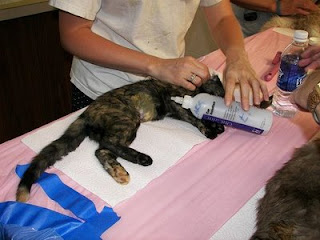 TNR in action -being injected with vaccines - photo by Feral Indeed!
TNR is Not Good Public Health Policy. We must manage feral cat colonies on the basis of known public health issues (and not ethical principles? - my question). So says the reality check website and the website: My Central Jersey (http://www.mycentraljersey.com). TNR stands for trap, neuter and return. TNR is generally accepted as the most humane and the only reasonable way to deal with and manage feral cat colonies. Simply killing them does not work as it leaves a void for neighboring feral cats to fill (see, for example, Ground Shooting of Feral Cats).
What is being argued is that sustaining large feral colonies that do not receive regular veterinary care is not sensible in terms of the important issue of peoples' health. The sayings of a number of organisations are used in support of this argument. The argument deserves attention. I'd like to address the statements of these organisations to see if they stand up.
National Association of State Public Health Veterinarians - they make a number of statements.
"…no evidence exists that maintained cat colonies adequately reduce human public health risks or appropriately address their impact on pets or native wildlife".
Comment: I didn't know that the intention of TNR (the purpose of which is not to maintian colonies but to gradually reduce them humanely) was intended to reduce human health risks. The primary intention of TNR, as I understand it is to deal with feral cats humanely i.e. to help cats not humans.
"…the maintenance of free-roaming/unowned/feral cats can be detrimental to public and environmental health…"
Comment: This is, no doubt, true. The only unanswered question is how big is the risk (very slight in my view) and if the risk to public health was a major factor in decision making there are thousands of hazardous events taking place daily that go unaddressed such as medical negligence. About 40,000 people die needlessly in UK hospitals each year through botched operations or care and nothing is done about it. How many people die from exposure to feral cats? How many people actually see feral cats?
"There is no evidence that colony management programs will reduce diseases such as bartonellosis, larval migrans, toxoplasmosis, and vector-borne zoonotic diseases. Rabies will also continue to be a risk, as such colonies are not closed". Finally, they state that, "Several reports suggest that support of "managed cat colonies" may increase the public's likelihood of abandoning unwanted pets in lieu or more responsible options".
Comment: Feral cat colony management is about the gradual reduction in that colony through neutering coupled with one off medical care. That is the best way to gradually remove health risks. It is currently the only proven way of doing it as far as I am aware. Shooting feral cats etc does not work. If TNR is Not Good Public Health Policy are they suggesting killing feral cats instead? The reduction in disease of feral cats in the TNR program isn't the primary goal. As the population reduces the diseases will naturally subside.
American Association of Wildlife Veterinarians
"Bites, scratches, and feces from feral cats can be a significant risk for exposure to several zoonotic diseases to the people that care for the feral cats as well as the general public".
Comment: Yes, true, but how big a risk and to how many people? Very few people in terms of a percentage of the whole population are engaged in the TNR programs and these people are aware of the risks and are volunteers. In addition vets are involved in these programs and are aware of and protect themselves from these zoonotic diseases. And there are very few zoonotic diseases of any significance. Rabies is one but rabies in feral cats is extremely rare in my opinion although I do not have figures.
Association of Avian Veterinarians
"supports actions by governmental wildlife agencies, public health agencies, and public or private organizations to ban or eliminate cat colonies on public lands in a humane manner and discourage feral cat colonies on private lands"
Comment: I think that there is a consensus that there is no better way currently to "eliminate cat colonies...." that the TNR program. What other humane method does this association suggest? The root cause needs to be looked at too; irresponsible companion animal "ownership".
Wildlife Disease Association
"supports actions by wildlife management and land management agencies, public health agencies and private organizations to ban or eliminate feral cat colonies"
Comment: As above.
Centers for Disease Control and Prevention
Comment: Their major argument is that, "cats accounted for 54 percent of domestic animals found with rabies in 2005." How many cats does that represent? In Hall County, USA, all the 43 cases of rabies infected wild animals. One domestic cat caught rabies and infected 2 people who were safely treated. Once again this is about risk. See Cat Rabies Symtoms.
TNR is Not Good Public Health Policy - For me the point is this. There are risks in the TNR program that lead to public health concern, fair enough. But what is that risk? It needs to be quantified. I would argue that it is a slight ridk and it should not be used to support an argument that willy nilly killing, by any means, should be allowed as is the case in parts of Australia and no doubt other countries. Australians can shoot domestic cats legally. This can lead to "accidents" that are legally actionable (for compensation). And yet the feral cat population in Australia is not in decline.
In short, the benefits of TNR outweighs the burdens. And the focus should not be on the feral cat but the root cause of the feral cat, us, you and me, people, the human. Lets tackle that issue long and hard before we tackle the symptom, the feral cat.
Please see these:
TNR is Not Good Public Health Policy to Feral Cats
By Michael Broad at February 18, 2009