Ocelot Kitten - photo by Just chaos. These were the best pictures that I could find of an Ocelot Kitten that I was free to publish on this website.

People search for "Ocelot Kitten" - why? For two possible reasons. One to see a picture of an Ocelot kitten and the other to source breeders of the Ocelot so that they can adopt one as a pet. The well known artist Salvador Dalí kept an Ocelot as a pet, travelling with the cat. 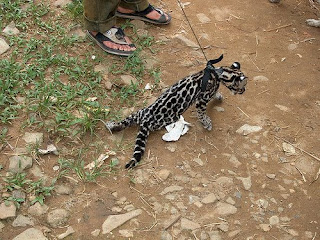 Ocelot kitten for sale - photo by dzaks. I think that this was taken in Panama in 2002. She/he doesn't look too happy.

So, if visitors want to see a picture of an young Ocelot they are here. What about buying one as a pet? Well, the Ocelot as we know is a medium sized wildcat. You can read and see a bit about the Ocelot and this cat's habitat here: Ocelot habitat.

The basic issues are: compliance with local legislation, dietary requirements, veterinarian requirements (can your vet provide suitable veterinary care?), declawing (no and no again but some people do, why get a cat like this if we are going to make the cat less than the cat we liked in the first place), moral issues (do we want to keep a wildcat in our own zoo? - see range below).

An Ocelot kitten will become a cat and the Ocelot is mostly nocturnal and very territorial so will fight strongly to occupy his/her territory. Are we introducing an Ocelot into a household/space/enclosure where there are existing cats? If so this looks complicated. Ocelots need a range of 18 km² (7 sq miles) to hunt prey that consists of small mammals that include rabbits and rodents, birds and fish, for example. Do we have small pets such as hamsters, guinea pigs?

In 2006 IUCN Red List the Ocelot is considered as "least concern" currently, apparently. The Texas Ocelot is considered endangered under the same list. I would suspect obstacles to considering keeping this cat as a pet on a number of levels the first being legalities on the basis of the cats conservation status. The Serval cats link above has some links to USA State websites which may provide some clarification.

The Ocelot was (still is?) hunted for her fur, which is outstanding. It is a spotted tabby pattern (rosettes and black spots). The coat is similar to the Clouded Leopard another very strikingly attractive cat.

From Ocelot Kitten to Home page