Tasmania is an island about 200 mile 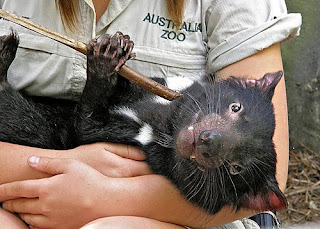 s south of Melbourne, Australia and is an island state of Australia. Anyway, the Tasmanian government felt that they needed to do something about the feral cats which are taking over the role of the famous Tasmanian devil on the island. The Tasmanian devil is a similar size to a domestic cat and is only found in Tasmania so I guess it is an important native species for the Tasmanians.

The Tasmanian Devil's existence is threatened by a communicable disease that causes cancer that starts near the mouth and spreads; a horrible disease. The government is trying to control it.

The rise in the feral cat population is a particular concern as it seems to be exacerbating the weakened chance of survival of the Devil. Hence the concern over the need to control and perhaps eventually eliminate the feral cat problem. But desexing feral cats is not the only answer.

The plan was mandatory desexing of the domestic cats of the island plus, it seems, compulsory microchipping and registration of cat breeders. However, it has now been decided that most domestic cats are desexed anyway so it won't work.

However, in my view, some domestic cats are clearly not desexed (see neutering cats) and some of these unneutered cats are being abandoned. How else can there be a feral cat problem? Cats are very efficient breeders (see below). However, I am glad to see that the government may consider compulsory microchipping. This should allow irresponsible people who abandon their cats or let them stray to be identified. This should lead the person being punished and not the cat. The problem with this strategy is enforcement, unfortunately. Will people comply with the law?

I hope the existing feral cats are treated humanely. If we allow a cat to be born we are ultimately responsible for the welfare of that animal. These should be trapped and neutered to gradually bring the feral cat problem under control. The problem is then being tackled from both ends so to speak - the cat end and the human end. The "human end" of the problem is it seems a combination of irresponsible cat breeding (or people allowing their cats to breed - i.e. ad hoc laissez faire non-commercial breeding) and irresponsible pet ownership. That is the irresponsible breeders supply the irresponsible keepers.

The human element must be dealt with as simply killing feral cats or desexing feral cats does not cut the supply originating in irresponsible human ownership.

On a simplistic calculation (but one that helps comprehend the scale of the "problem"), and calculating for the maximum figure a breeding pair of cats and their offspring could produce 65,536 cats in 5 years.