The Mekong Bobtail is named after the Mekong River that divides Thailand from the other states of South East Asia. It is a pointed cat like the Siamese. It was first recognised in Russia.

This is an ancient breed with a timeline similar to the better known Siamese cat. This is a rare cat breed. We know that the Siamese cat had a kinked tail in Siam, now Thailand. In fact many cats in Asia have short or kinked tails. The modern Mekong Bobtail retains the kink in the shortened tail. It is possible that the Manx, the most famous short or tailless cat, comes from Asia and was imported to the Isle of Man. The short tailed cats of Asia were mentioned by Harrison Weir in his book of 1889, Our Cats and all about them. Charles Darwin referred to them in The Variation of Animals and Plants under Domestication of 1883.

In the late 19th century about 200 "royal cats" were given to Nicholas II, Tsar of Russia by the King of Siam Chulalongkorn, Rama V. Many had short, kinked tails. These cats together with other bobtailed cats brought into Russia from southeast Asia are the foundation cats for the Mekong Bobtail. One of the first was a cat owned by the actor Michael Gluzskyj. His cat lived to the ripe age of 20 years. Another cat was Nyan from Vietnam (owners Kalugin and Lisenkova).

In 2012 there are about 1,500 Mekong Bobtail cats registered with clubs in Poland, Czech Republic, Russia, Belorussia, Latvia and Germany.

The first breed standard was drafted by Olga S. Mironova. It was adopted at a meeting of the General Assembly of the World Cat Federation (WCF) meeting in Essen, Germany on August 14-15th 2004 ("MBT" index). Mrs Lyudmila Esina, a WCF all breed judge played a significant role in developing this breed.

The Mekong Bobtail differs physically in many respects from the Thai. The Thai is a "classic Siamese cat" in between the traditional and modern in conformation and general appearance. It is prohibited for the Mekong Bobtail to be outcrossed to the Thai cat.

As is clear from the pictures that this is a medium sized cat of normal proportions. The coat is short and glossy. The ears are medium in size and the eyes are blue and oval shaped.

This is an intelligent cat of excellent health with an easy to maintain coat. Like the Siamese this a talkative and sociable cat.

Apparently the problem of shedding hair is minimised so says Alex. This is due to the close lying single coat.

Seal pointing is the major type of pointing. This is the original form of pointing.  The following are also seen but less commonly:


Earlier work from me

2009: I confess that I have had difficulty finding out something about the Mekong Bobtail cat breed other than from the illustration, from which I can see that this is a pointed cat with a short tail, looking very similar to a traditional Siamese cat with a shortened tail. Maybe that is all I need to know? The first thing that comes to mind is the name "Mekong". My mind drifts to Vietnam for some reason or another (war films probably). Is there a Mekong Delta in Vietnam? In which case the Mekong should be a river. Well, Google Maps confirms that. So, is this a cat breed from Vietnam? Update 2012: See a posting from a Mekong Bobtail breeder in Russia: Mekong Bobtail - the real legendary Royal Siamese. 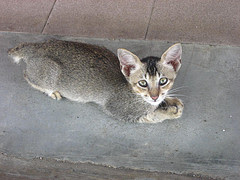 Above: Bobtailed feral cats are very common in Asia. For example I found the picture of the cat above in about 2 mins (picture is by prizepony published under a Attribution-NonCommercial-NoDerivs creative commons License - note this is not a Mekong Bobtailed cat of course). And a famous bobtailed cat from Asia is the Japanese Bobtail, which has a extraordinarily long history so certainly started life as a mixed breed and/or feral cat as the cat fancy only started in the late 1800s. It would almost be a forgone conclusion that there are pointed cat with bobtails in Asia.

So, can I presume that the Mekong Bobtail is a feral cat from Vietnam that has been bred to become a pedigree cat by meeting the cat associations criteria? It seems that I can as it is described as a being developed from a local variety of cat. This would mean a domestic cat (mixed breed) or a feral or semi-feral cat. It is common for mixed breed cats to be developed into purebred cats. After all not all purebred cats are hybrids. In fact, the Mekong Bobtail is recognized by the World Cat Federation (WCF) and listed under Siamese and OSH (Oriental Short hair). So this is in effect a short tailed traditional Siamese cat

In reference to the WCF breed standard these are some key points:

From Mekong Bobtail cat to Modern Siamese cat
Go and see links to lots more cat breeds that are not "mainstream" but very interesting.

Here is a picture of a chocolate point Mekong Bobtail:


I comment on this cat on this page: Chocolate point Mekong Bobtail.

Photo heading the page: this is published with the written permission of Dmitry - KaDiS Photo ( link to their website is under the photo) - the emails conversation dried up as to details but permission was granted. Problems? Please leave a comment or email me on mjbmeister@gmail.com.
cat breeds