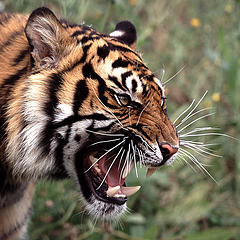 India's Project Tiger a once lauded tiger conservation program has failed due to a lack of commitment.

Money is at the root of the failure to preserve the tiger in India. The promise of a profitable income comes from the Chinese medicine market, in which tiger bones play a major part. Other parts of the body of a tiger are used in Chinese medicine. The profits that can be made from selling body parts for Chinese medicine is greater than for selling pelts. At the consumer end of the problem we have China and her medicine.

At the conservation end we have India and her lack of commitment by failing to provide sufficient funding. That though was not always the case it seems.

When Project Tiger was set up in April 1973. Indira Gandhi was interested in wildlife and had spoken about conservation some 4 years earlier in a speech to the IUCN General Assembly in Delhi in 1969. I think this fact tells us about one of the weaknesses in wildlife conservation. The time it takes to translate thought and intention into deed and action.

While plans are made and motivation translated into action in the field of conservation, the poachers for tiger bones and body parts are already highly motivated and there is little delay in taking action.

India's Project Tiger was set up with $80 million in 1972. At that time there were an estimated 1827 tigers in India (a very small number it seems to me). After pouring all that money into tiger conservation by 2008 there are considerably less tigers in India, an estimated 1411.

It became clear that better policing of the reserves was needed. But the funding was not forthcoming. At that moment the battle was lost. I am not sure when this decision was made perhaps the mid 1990s. The fact is that the money in selling tiger parts is a greater motivator than the conservation of the tiger. This tells us that humankind is not yet in a state where conservation can be said to work as the problem of the tiger affects many other species, the Cheetah is another example (see cheetah habitat)

If Chinese medicine is one major factor the other is habitat loss. There is simply not enough room left in the world for an animal that needs to roam very widely to survive. The reserves that remain in India are separated and the tiger populations on each reserve is low (50-100). Does this mean that inbreeding is and has taken place?

Inbreeding will weaken the health of the tiger population and lower reproduction rates exacerbating an already fragile situation. Perhaps a tipping point comes when the tiger is lost. For now it seems that point has not been reached. It is not as if India is financially unable to help.

One of the richest men in the world is Indian, Lakshmi Narayan Mittal is still worth about 16 billion (was 30+ billion) despite the financial crash. Can't he chip in a few tens of millions to resurrect India's Project Tiger?

Another point: China really should do much more to protect the tiger by passing regulations concerning the constituents of Chinese medicine. In the West substitutes are used. Why not in China? To not do so is indefensible.

India's Project Tiger - photo of tiger top of post is by GavinBell and published under a Attribution-NonCommercial-NoDerivs creative commons License.