Here is a great picture of a Japanese Bobtail cat by Helmi Flick. 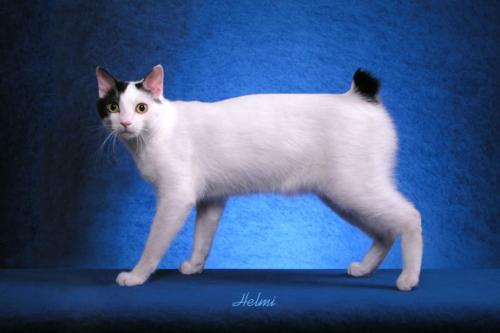 The picture is both aesthetically very pleasing and interesting while also being very clear and of a type that is useful for informational purposes.


The Japanese Bobtail is different to the Manx cat a better known breed. Some people call all cats with a short tail Manx cats. That is how well known they are but it is not true. Anyway sometimes the Manx has no tail. There are other short tailed cats. A long haired Manx is called the Cymric. A Russian tailless cat is called the Kurilian Bobtail. There are more; explore a list of really rare breeds on this page: Domestic cat breeds.

The Japanese Bobtail is a type of short tailed cat that is common in the Far East. The tail is never absent just substantially shortened due to the presence of a mutated gene, which is different to the Manx mutant gene. Unlike for the Manx there are no accompanying skeletal abnormalities that might cause ill health (see Manx cat health)

The Japanese Bobtail cat tail length is normally less than 4 inches or 10 cms long. The tail is often rigid and/or curved and the hair on it is long giving the impression of a pom-pom.

The white spotting gene is very evident in this cat's white coat with splashes or blobs of color. As there is a lot of white it is called high grade spotting. See cat coats solid and white. The most popular Japanese Bobtail coat color is the tricolor or Minke. These cats have patches of orange and patches of black against a large white canvas.

These cats are not at all cobby but quite lean looking. They look like extremely glamorous feral cats. The lithe cats are cats such as the Bengal. The Japanese Bob is not like that, more lean and spare looking. The Jap.Bob. has a very very long history (starting from the 5th century) and is one of the ancient breeds - see cat history time line.
By Michael Broad at October 24, 2008