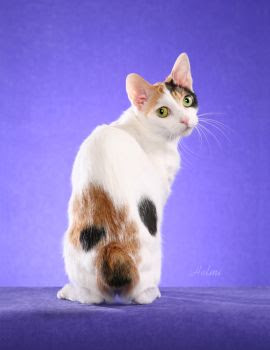 The Japanese domestic cat is seen as the Japanese Bobtail cat, at least the purebred version. But do all Japanese cats have short tails? The answer must be a definitive no, particularly as the best stray cat photographer in the business, MAR, has let me publish some of his photographs on the Pictures-of-cats.org website; see stray cat picture - these are all Japanese cats and no bobtails (or at least very few). Apparently, you can see stray cats in the forest of Yanbaru and in sub-tropical Okinawa and also Tokyo's commercial Ginza district and an island called Teuri off northern Hokkaido.

Further evidence is in a drawing of a cat by Toba no Sojo (1053-1140). The drawing is of three cats with normal length tails. At this time, almost 1000 years ago the Japan domestic cat was, it seems, becoming more commonly encountered.

In the 18th century due to a genetic mutation cats with short tails become more common (this idea conflicts a little with the conventional view that the Japanese Bobtail cat was around from the 5th century). It seems that the short tailed cat became synonymous with Japan over the intervening 200 years. An area, in Japan, where they seem to have been more common was Naniwa (Osaka).

Imaizumi Tadaaki calls the Japanese Bobtail "genetically inferior" and he is correct. The Japanese Bobtail became less ubiquitous in Japan against the importation of breeds from the west after WWII. It is in the west, particularly America, where the breed has been revived. This cat breed is no a very glamorous show cat.