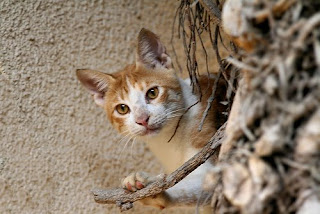 Feral cats spread disease? I have just read a report from a website called XPRESS about the rising population of feral cats in Dubai. The report claims that people risk catching disease from feral cats and that they are a health hazard to society. The report also claims that half the feral cats in Dubai carry parasites that can cause blindness or miscarriage in pregnant women. This is simply wrong and is a misrepresentation regarding feral cats.

As regards miscarriage in pregnant women this is a reference to the parasite toxoplasmosis. Toxoplasmosis is caused by a parasite called toxoplasma gondi. Provided sensible and simple precautions are taken a pregnant women living with a domestic cat would be highly unlikely to contract the disease from the cat. There is more risk in raw and poorly prepared meat. How one can catch the disease from a feral cat I don't know. I'd be surprised if there was one case of it worldwide; perhaps in a poorer country.

As to blindness from cat parasites this must refer to the same parasite. When Toxoplasma gondii invades cells in the retina of the eye, blindness can result. Once again this is extremely rare and relates to chronic infections.

As it happens 20% of Americans are infected with the parasite. Yes, 20% and the infection didn't come from cats. They are benign infections. I would urge the editors of XPRESS (http://www.xpress4me.com) to read up on the disease which can be done here: