Here is a fantastic picture by Helmi Flick of two Birman kittens that are just entering adulthood. Both these pictures are links to much larger versions. 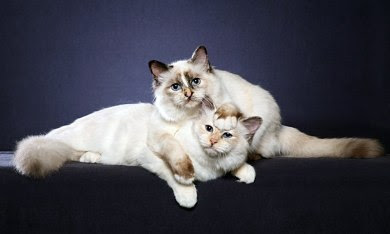 And here is another great Helmi Flick picture of three Birman kittens: 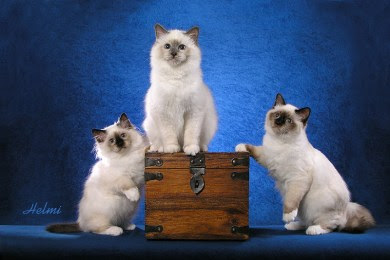 If you are looking to buy a Birman kitten you might like to read this post and go to more on this page: Birman cat (more great pictures and a full description plus history and some top breeders).

The Birman is a pointed cat an unusual feature, white feet. Colorpointed or the Himalayan longhair cats have the genotype aacscsll. aa represents the non-agouti gene (homozygous), cs the pointing gene and l the long hair gene.

The Birman is a Colorpointed cat. These cats are not just longhaired Siamese cats as the body conformatoion is different, more cobby. Colorpointing is heat sensitive. As the Birman has long fur providing better insulation than a Siamese cat this has an impact on the quality of the pointing. The Colorpoint cats have a "clearer" body color which produces a greater contrast between the body and dark points.

Cat breeders say the Birman has "gloves" on their feet (maybe it should be socks on the hind feet and gloves on the foreleg feet?). The gloves should be as shown in the pictures above, confined to the feet, otherwise they would be knee length socks! The socks cannot go beyond the hock of the hind legs. There are some question marks as to what causes the gloving. It has been shown that the white gloving is caused by a dominant gene. The gloving could therefore be due to the familiar white spotting gene (S) or a different gene as yet identified (it seems to me). The limiting of the white spotting to the feet could be due to the presence of polygenes.

Without meaning to be critical Dr Ross D Clark (editor) in the book Medical, Genetic & Behavioral Aspects of Purebred Cats, says that certain genetic lines can show up with weak hind legs or nasal obstructions. This may have been dealt with as the book was published in 1992. Other genetically linked conditions that have been associated with the Birman are, epibulbar dermoids (British Birmans 1 in 150), fine eosinophilic granules (no health issues) and hip dysplasia (occasionally found in the Birman cat).

For show cats the standard is high and cats will be disqualified if they don't have those gloves on all four paws that define the breed. Cross eyed cats and cats with kinked tails are also disqualified. The original Siamese cats had kinked tails. They were considered desirable in Siam (Thailand). The head of the Birman should not look like a Siamese or Persian. I am referring to the traditional Siamese.


From Birman kitten to Home page