Myanmar is in breach of CITES 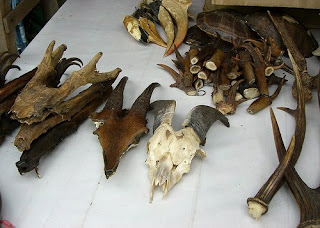 Animal body parts for sale in the Burmese town of Tachilek. The photographer says that the photograph was taken quickly before being told that no photographs were allowed. Tiger penis and Clouded Leopard skins were on sale. A dried tiger penis can be worth $6,000. Photo by 9.81 meters per second squared.

Unsurprisingly Myanmar is in breach of CITES. Surprisingly Myanmar does have animal welfare law. The law is the The Animal Health and Development Law. It would be a relatively simple step to incorporate CITES - the Convention on International Trade in Endangered Species of Wild Fauna and Flora into the local laws of Myanmar. It could be linked into the above law.

Why hasn't this been done? And why is the international community not enforcing the terms of the convention against Myanmar? The country is wantonly and arrogantly ignoring open trading of CITES listed species including the wild cats listed in Appendix I, the most endangered species.

See CITES in relation to cats.

WWF surveys indicate that body parts from 1,200 (yes 1,200) species were found to be on sale. The wild cat parts belonged to the Tiger, the Clouded Leopard, the Marbled Cat, Leopard Cat and the Asiatic Golden cat, all most endangered species of wild cat listed in Appendix I. Non-protected wild cat parts were also on sale. The greater number of parts come from the rarer species however.

As I have said on this page, Burma is well placed geographically to trade in the body parts of rare wild cats as it neighbors countries where the parts are used in medicine (e.g. China).

There is simply no point in having an international convention unless the members of the convention who comply with it enforce the terms against those who are in breach. Will this happen before these wild cats are extinct in the wild? Do we care? I like many other people have little faith. In some ways CITES undermines the preservation of wild species because it gives the impression that something is being done when it isn't.

As Myanmar is in breach of CITES lets see, please, some real on the ground down to earth action that is not perverted by commercial self interest and corruption.
Email Post
Labels: Wild cats