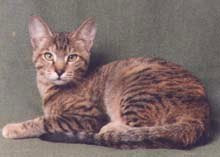 The Kanaani cat resembles a rather refined tabby cat, or to put it a different way an Ocicat. When sitting up the long neck and frame of this cat gives her the appearance of a Savannah cat almost. This is an elegant cat. This cat should not be too slender however as it is a fault under the World Cat Federation (WCF) standard if the Kanaani cat is oriental in appearance. Other names for this cat breed are Canaan cat and I have seen Canaani cat. I'd like to know where the name originated (see below - I found out).

This is an experimental cat breed from Germany but the breed would seem to have originated in Jerusalem. It would seem that the Kanaani cat breed was first created at the Ha Jeruschalmi Cattery. The breeder there would be able to say how the name was devised. The Ha Jeruschalmi Cattery (or is it Jerushalmi) is, as the name indicates, based in Jerusalem. In fact it seems that the name Jerushalmi is a Jewish surname. The word "kanaani" means "Canaanite" and the Canaanite people are an historical biblical people from the Gaza Strip, Israel, West Bank, and Lebanon. That then seems to resolve the question about the name. Incidentally the word "Canaan" is "an ancient term for the region encompassing present-day Israel, the Palestinian Territories, Lebanon, plus adjoining coastal lands and parts of Jordan, Egypt and Syria." (src: Wikipedia published under GNU Free Documentation License, Version 1.2 or any later version - see Wikipedia licensing below)

Apparently the intention in breeding the Kanaani cat, which I presume to be a hybrid cat breed (but not a wildcat hybrid), is to create a cat that resembles somewhat a spotted subspecies of the African wildcat. It may be that this is in fact a refined feral cat. There are a number of incidences of feral cats or mixed-breed cats being developed into purebred cats. One is the American Keuda, a development from the barn cat. I have to speculate as I can find no website for the Ha Jerushalmi Cattery on the internet at the moment. There is a feral cat "problem" in Jerusalem. This would support the feral cat theory.

There is quite a long history beginning with the Bengal cat in the 1970s of creating domestic cats with the appearance of an exotic and wild looking wild cat. The Kanaani cat does not have that wild looking face treasured by Bengal cat breeders but there is certainly an element of the wild about her.

The WCF says that the pattern (the spots) of the Kanaani cat should be in black, cinammon and chocolate colors. The background color should be cinammon and the coat is ticked. Ticking is a form of tabby coat. The best known cat with a ticked coat is the Abyssinian cat.

The black pigment of the hairs of a cat are produced by the presence of a combination of the alleles a (representing the non-agouti gene), B (browning gene producing black) and D (representing dense coloration). The genotype for black coloration is aaB-D- (aa represents the homozygous form of the recessive non-agouti gene and the dash after the D means that this allele can be either recessive or dominant). The capital letter represents a dominant allele.

Here is a bit more from the WCF breed standard for the Kanaani cat. The neck should be long and slender. The ears are large and wide at the base with preferred lynx tips (see this Maine Coon - Miss Kate - for a great example of lynx tips or ear tufts). The eyes are large and almond shaped and the coat is ticked, close lying and coarse in relation to other cat breeds such as the Siamese.

Photo top right. This has been taken from this website: http://www.immisch.org/www.kanaani-cats.de/eschwer.htm, without permission of the owner of the website. I believe that the picture is copyrigth free. If I am wrong please tell me and I will remove the picture if that is what is desired.
Email Post
Labels: cat breeds