- October 13, 2008
The Ural Rex is a rare cat breed that was recognized by the World Cat Federation (WCF) in 2006. It seems that the WCF, which is based in Germany has a Russian "connection", which may partly account for the acceptance of this breed. The Ural region and the Ural mountains are mainly in Russia positioned just west of the central area of Russia. However that presupposes that the Ural Rex originates in Russia, which is the case according to a breeder of this cat in Dresden, Bjoern Jaenicke. He says the cat originated in Russia in the town of Ekaterinburg. Ekaterinburg is a major city on the central part of Russia just east of the Ural mountain range. The city is the main cultural and industrial center of the Urals Federal District. That then sorts out the origins of the name of the Ural Rex! 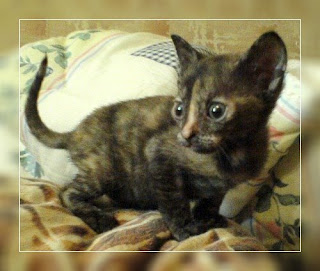 I have taken the liberty of publishing the above picture of Dorothea Uralotschka, URAL REX, with a black-tortie white coat, without yet receiving the permission of Bjoern Jaenicke, who I presume lives with this cat. This is because I have left an email but am yet to receive a response and I presume that he'll agree provided I give a link - click on the image to go to his cattery:

This is the first cat of this breed to be imported into Germany (src: i-love-cats.com). As far as I know the Ural Rex is not recognized by other associations. This is one of the newest recognized Rex cat breeds. According to Rex Cats by J. Anne Helgren, the Ural Rex has reportedly been found in the middle Urals region since WWII. I don't know if that is true.

I have learned some more about the Ural Rex and built a new page with some great pictures. It is here: Ural Rex

The coat comes in two lengths, short and semi-long. The coat is well curled as expected and dense. Apparently the semi-long haired Ural Rex is less popular than the shorthaired cat as the coat is less attractive.

This cat breed has a muscular body (don't all cats) and a medium sized ears set on a very interesting head shape - very inquisitive looking and the muzzle is rounded and the eyes bulge out of the head giving the slightly startled appearance.

It would seem that the mutated gene that produces the curly haired coat is different to the Cornish Rex but it is unclear if it differs to the Devon Rex.

The Ural Rex WCF breed standard provides some the pointers on appearance:

The breed standard reinforces that this is a medium sized and elegant cat with slender legs and oval feet. The head is a short and broad equilateral wedge. The Japanese Bobtail breed (this has page has illustrations) is another with an equilateral wedge shape head. The forehead is flat and the cheekbones prominent. The muzzle is broad and the chin strong.

The large eyes should have a color that is in harmony with the coat color. The breed standard says that the coat should be in firm and flat waves that have an elastic quality. The hair is fine and dense.