Iberian Lynx - is the way we will always see this cat in the future? Photo by . SantiMB . The photographer said "sad look". See the licensing at base of post.

The problems of the critically endangered Iberian Lynx took a long time to happen. A long, long time. Why didn't we do something? Do we care? The term "critically endangered" comes, as we probably know, from the IUCN Red List (see IUCN Red List for Cats). IUCN stands for International Union for Conservation of Nature. The IUCN Red List is considered to be the most authoritative source of the status of animal and plant species under threat of extinction. The story of this cat's predicament has been reported around the world. Will it change anything? Over the time the cat was on the "endangered" list nothing changed or if it did it wasn't anywhere near enough. Who is to blame?

How does the Red List signify this precarious status? See the chart below:

When I think of the Iberian Lynx I think that is it no surprise that this wonderful looking and athletic wild cat is endangered. Why? This cat lives in Europe and the last time a medium sized wild cat lived in the UK was thousands of years ago. Although, a small wild cat still lives in the UK, the Scottish Wildcat, a fine and fierce cat of great skill.

The critically endangered Iberian lynx is native to the Iberian Peninsula - where's that? See the picture below, please:

Areas of habitat of the Iberian Lynx are marked in green. You can see the boundary between Spain and Portugal and the small fragmented areas of habitat in Southern Portugal and Spain. See below regarding the licensing for the publication of this image.

OK, so this lovely wild animal lives mainly in southern Spain and Portugal. These are EEC countries so this is rare, very rare, unique in fact (see rare domestic cats). I guess the middle of Spain is quite sparsely populated by people relative to some other European countries. When we fly over it we can see that. But the areas of habitat are relatively small and separated. This is unhealthy for the Iberian Lynx as the cat is isolated in low populations on small "islands" of habitation.

What is the size of this cat? About 115 centimeters including the tail. That is about 45 inche 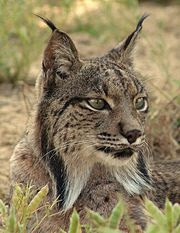 s or 3 inches under 4 feet. This male cat weighs an average of about 13 kilograms, which in pounds equates to 28.6 lbs. A very large domestic cat in good shape might approach this figure. See a weigh comparison chart, wild cat to domestic cat.

The critically endangered Iberian lynx is then a small wild cat. This cat must look a bit like a large domestic cat. This cat inhabits an open scrub landscape and hunts prey no larger than hares.

This cat has sideburns and classic tufted ears. See a Maine Coon cat with tufts to match these. The Iberian Lynx hunts animals such as birds, reptiles and rabbits but more recently sometimes larger prey such as young deer. The cat's territory can be 10 square Kilometers.

The extremely parlous state of this cat as indicated by the IUCN Red List rating as critically endangered is as a result of the very low world population of about 100 cats. Habitat loss is probably the single biggest factor in the gradual extinction of wild cats. The tiger and cheetah both suffer the same fate. The cheetah lives on a farm in effect; what chance for survival?

Habitat loss for the Iberian Lynx is due to human population growth causing infrastructure and urban resort development, tree mono cultivation (presume this to be logging activities). The Iberian Lynx's main source of food, rabbits, are also in decline due to disease (but perhaps also indirectly in part due to human activity).


Unsurprisingly, there are very few (1) video of the Iberian Lynx in the wild and they won't allow the video to be embedded so here are two captive cubs instead.

As the decline in population of the now critically endangered Iberian lynx has been effectively ignored for so long I can only presume that we prefer or accept that this animal is best kept in a zoo. Perhaps we are resigned to the fact that a lot of animals are best kept in zoos as the only practical way of cohabiting with people. I am compelled to decide that we (humankind) have through our actions or lack of action implicitly decided that life will be easier and less complicated if we don't have to worry about other animals inhabiting this planet with us.