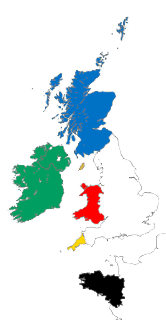 This brings me nicely onto the naming of the cat breed. What does "Celtic" mean? The Celtic nations today are set out in the map to the right - i.e. where one of the Celtic languages is spoken. This map published under Wikimedia® creative commons license license = Attribution-ShareAlike License. The author is QuartierLatin1968.

However most countries of Central and Western Europe have been influenced by the Celts. This indicates to me that the name for this cat breed originates in the concept that the Celtic Shorthair cat is a cat of all places in Europe. In other words a standard mixed breed domestic cat that we would see in any large parts of Europe. I am guessing. If the person(s) who made the name could leave a comment that would be great.

I have been unable to find a picture of the Celtic Shorthair cat nor a breeder (but see below). But I think we can visualize a nicely balanced standard looking cat that we are familiar with. This is strongly reinforced in the WCF breed standard which states that this cat "corresponds to an average European cat". It goes on to say that there should be no hybridization (i.e. no formal development with outcrossing bringing in other breed types, appearances). The Celtic SH is not accepted by the WCF in the pointed coat, cinnamon and lilac or the dilute versions of these colors.