Bengal Tigers In The Wild With Half Orange, Half White Coats

Why do I sometimes see Bengal tigers in Indian tiger reserves with a coat background colour that is half white and half orange? 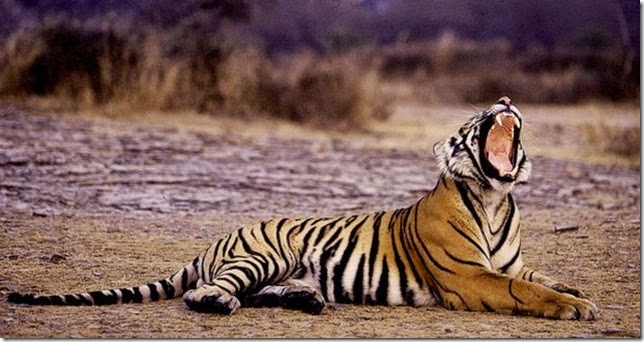 As can be seen in this image the change in background colour starts in the middle of the tiger. This is the case each time I have seen it. I am surprised no one has mentioned this. Perhaps they have but I have not noticed.

This is not a golden tabby tiger (strawberry tiger) because they only exist in captivity and in any case the coloration is different and the background color fades vertically in strawberry tigers. In the tiger I refer to the orange color fades hozirontally.

I don’t think this is a genetic mutation and neither do I think it is caused by age. My preferred reason for this coloration shading is health and/or nutrition. The pigments in the fur are: eumelanin which is brown/black and pheomelanin which is yellow/reddish brown. The balance between these two affects the coat color, as does the overall presence of these pigments.

As the pigment  fades from orange to white (transparent – no pigment) it would appears that there is lack of pigmentation in the rear half. I know that in the domestic cat a lack of tyrosine causes black fur to become rusty. Tyrosine is an amino acid in certain foods. Is the Bengal tiger in some reserves getting a good diet or it is deficient in some nutrients?

If the “problem” (is it a problem?) is caused by diet then it must linked to available prey. That would not surprise me because not only is the tiger under threat in reserves so are its prey. Tiger prey is poached like the tiger itself. Or is the tiger being poisoned?

I am sure someone will come forward and leave a comment which poo poos what I have written and which provides a full and sensible answer. Good. I look forward to it.