As regards cat ownership - which is better described as cat guardianship or cat caretaking - perhaps the most important thing a person can do is to understand what normal feline behaviour is and then accept it and furthermore accommodate it, by which I mean ensure that the cat can express normal feline behaviour within the environment provided by the owner. It is pretty much as simple and as straightforward as that. 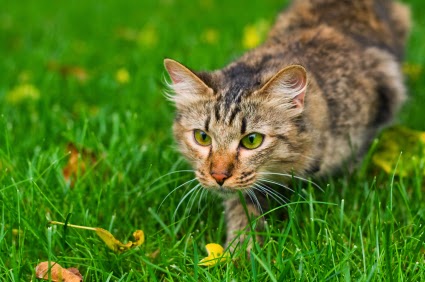 It all starts with understanding the fundamentals of cat behaviour and respecting the domestic cat.  A person respects the domestic cat by letting the cat behave normally.  It's common sense because if any sentient being including human beings are prevented from expressing their natural desires, motivations and behaviours this will inevitably lead to stresses and abnormal behaviour together with possible health problems.

If you click on the link above you will see that I have referred to two central aspects of normal cat behaviour which can irritate cat owners, namely scratching and predatory behaviour.

Cats need to scratch because it is part of natural behaviour.  Scratching is quite a complex behaviour because not only does it slough off a layer of the claw it also marks territory by leaving a scratch which is a visual signal and it also marks territory by leaving a olfactory signal because there are scent glands in the paws of a cat.  Pretty well everyone knows that by now because of the Internet.

The answer to scratching is not a quick fix namely chopping off part of the cat's toe (declaw) but to accommodate this behaviour: to respect it.

The reason why cats exhibit predatory behaviour even when they're not hungry is because they are built to respond to signals (cues) from prey items such as mice.  These signals include rapid movement and sound.  A domestic cat is programmed like a wild cat.  This means that a cat cannot wait till he or she is hungry before she hunts prey because the success rate is quite low at around 17% and if a hunting session started off when the cat was hungry and the cat has to try and try again it is quite likely that the cat will be unable to succeed because of fatigue due to a lack of nourishment.  It is simply about survival and it is a practical solution.

If people know that then they might be less critical of the domestic cat when he brings in prey even though the owner has put down first-class food in a bowl in the kitchen!

Obviously when accommodating a cat's natural behaviour which includes hunting outside a cat owner needs to not only respect their cat but also their neighbours and native wildlife species.  This entails finding a balance between these competing objectives.  That is not beyond the bounds of possibility. Like almost everything in life it comes down to compromise.  One way to do this if a cat is allowed out side is to limit outside activity to times other than dusk and dawn because those are the times when a domestic cat is liable to be most active for hunting.  The cat owner could exercise a curfew on their cat at those times.  This is just one example.