Cutting a hole in a slice of bread and putting it over your cat's head was, at one time, a bit of a fad; one of those Internet crazes but this fad is fading fast and turning to toast, which is the right outcome. 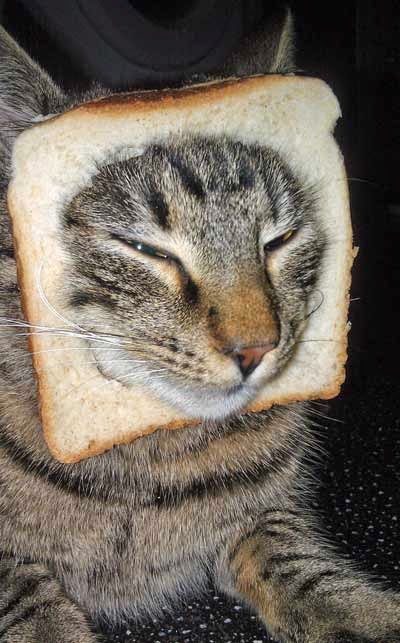 The Daily Mail in the UK posted an article on May 10, 2014, 1 day ago, giving the impression that it is a current Internet cat craze when it is not.

I agree with all the comments written by visitors to the Daily Mail article. They all think it's a silly idea and a waste of good bread! Someone even said that with people starving in the world it's a bit stupid to try and generate another cat craze out of slices of bread.

On top of that cats are not going to like it and I would be surprised if the slice of bread stayed on a catch much longer than it took to photograph the cat.

The breadedcats.com website is doing badly in terms of numbers of visitors which is the way it should be because I don't like this sort of disrespectful attitude towards the domestic cat. Although in defence they make it clear that people should not upset their cat when they try this. However, the simple fact of suggesting that people might try it is going to encourage irresponsible people to do bad things. I'm not saying that it is likely that any cats were hurt or anything like that but the sooner the last vestiges of the silly idea becomes toast the better.
Email Post
Labels: breaded cats cat crazes