Man Flies From Taiwan To S. Korea With His Black Cat Locked In His Main Luggage 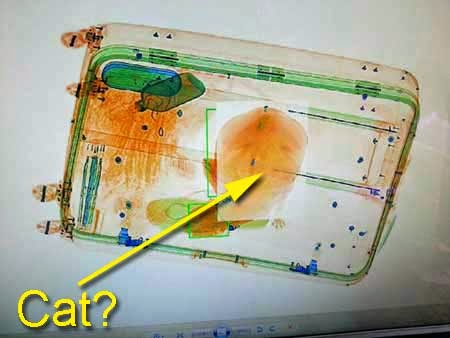 Yes, this guy locked his living black cat into his main luggage which goes into the hold of the aircraft and then flew from Taiwan to Seoul, S. Korea.

He got the cat to South Korea and then airport staff (customs?) discovered the cat in the luggage via x-ray whereupon the cat was sent back to Taiwan and placed into quarantine for 180 days. The man was fined.

The cat was probably lucky to survive because there must have been a lack of oxygen problem. The cat could well have suffocated.  Cats are good survivors. We know that.

It makes me wonder why this person put this cat through the ordeal.  We don't know whether the cat belonged to him or not.  Once again we could make a fair presumption that the cat does belong to him.  In which case he must be the stupidest cat owner in the history of cat ownership.  Perhaps not.

A lot of people do very odd things but you would have thought that he would have considered the dangers of locking his cat into a suitcase on a 2+ hour flight.and then rejected the idea.  He could well have ended up in a hotel in South Korea, opened up his suitcase to discover his cat stone dead.