Cat's Cradle is a game played by two people with string.  In the UK in the mid-1800s it was played by children. It was called cat's, catch or scratch cradle. 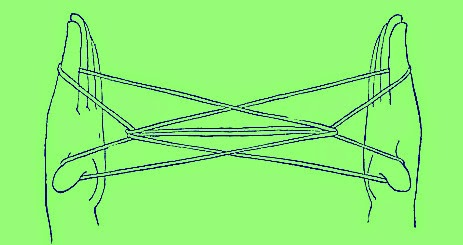 Figures are created through the way the string shapes up in the hands of the players.  I have never played the game.  I don't see the shapes of figures in the pictures that I've seen but perhaps I'm not using my imagination enough!

It seems peculiar that the word "cat" is in the title to this game. The word "cat" may be a corruption of the word "cratch" from the phrase"cratch cradle", which is also called "manger cradle", in which the infant Saviour was laid.  If this is correct is a clear case of a word being corrupted during use but I see no connection between the word "cat" and this game based on this corruption neither do I see a connection with manger cradle except in the general shape formed.

Some of the figures formed by the string may resemble a cat! Not sure. Do you know more than me?

Cratch is the French creche (a rack or manger).

If you search for cat's cradle on the Internet you come up with various uses of this phrase. There is a book entitled Cat's Cradle, a shelter for cats and a boarding catteries cats for example.
Email Post
Labels: Cat History cat's cradle