Sumo from Brisbane, Australia is not only a large, big boned cat, he is also very overweight and as a result he weighs 31 pounds or just over 14 kg. The average cat weight is around 10 pounds or it should be. 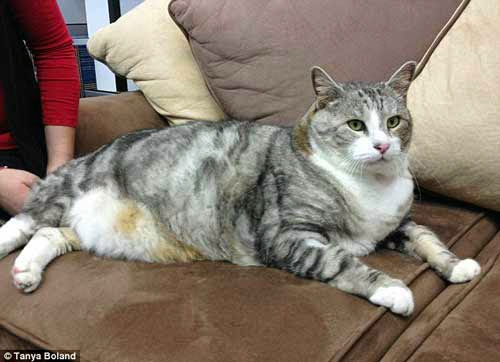 They say that domestic cats in the West, especially the UK and USA are becoming more and more obese in line with their owners (I regret to say) but it appears something similar may be happening in Australia judging by the size and shape of Sumo.

Sumo is the largest cat that the RSPCA have looked after over the preceding four decades and I can well believe that. I think that his exceptional weight is, as mentioned, in part due to his physical size.  This is a big grey tabby and white cat.

Sumo was brought to RSPCA because his owners were moving home and they couldn't take Sumo with them. I regret to say that I have heard that excuse before and it may be a genuine reason but very often it is a rather glib excuse to abandon a domestic cat which it is clear they were unable to look after properly. I don't wish to be overly critical but anyone who lets their cat reach the weight of 31 pounds is doing something wrong like overfeeding their cat (on the basis that the cat is not a large Maine Coon or wild cat hybrid).

A cat losing weight should lose it gently over a period of about 6 months. Obese cats are subject to health conditions that wouldn't exist but for the obesity such as heart and kidney disease, diabetes and arthritis.

Note: the photo is by Tanya Boland who works for the RSPCA.