Cat advocates like to see businesses treating feral cats humanely even if it does place a small burden upon the business by way of an overhead.  I think there are benefits to a business who treat feral cats on their property humanely.  It is good publicity so you could argue that it is a sensible business decision as well.

In this instance, I'm talking about the 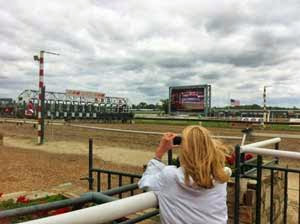 Parx Casino Racetrack in Bensalem, USA.  Not only is this a racetrack for horses it is also a home for about 300 stray and feral cats. Strays, let's remember, are often wandering domestic cats.

The racetrack management were becoming concerned about their growing population because of their impact upon the business.  There were rumours that they were going to react to their presence in a way that is not untypical of many businesses: kill them.

Refreshingly, they change their mind and now they are working with the Pennsylvania SPCA and other organisations in a coordinated effort to do what we all know is the best way to treat feral cats: carry out an extensive trap-neuter-return program.

They hope to be able to trap and neuter up to 200 cats over a period of about a week. If you try and relocate them more cats will simply  replace them and if you kill them the same thing happens.  It is far more efficient to leave them where they are while preventing them from procreating.

Over time the population simply reduces and the whole situation is managed humanely and perhaps as important is the effect that this process has on the community.  People will notice that the racetrack is behaving in a decent way.  There are many cat lovers and cat advocates who are concerned about the treatment of feral cats.

The feral cat has been at this racetrack complex since it was built. In fact, it's not the first time that trap-neuter-release has been practised in this complex because the adjoining casino had implemented the same program some years ago.

As a cat lover myself I very much like to see business behaving responsibly towards the feral cat.