This pretty, young Chinese woman has an ugly side to her.  She has a mean and nasty side to her, no question about that.  She adopted a cat and within 2 weeks, in a fit of anger about something else, she cruelly beheaded her cat, dismembered her cat and then posted the photographs on China's equivalent of Twitter. 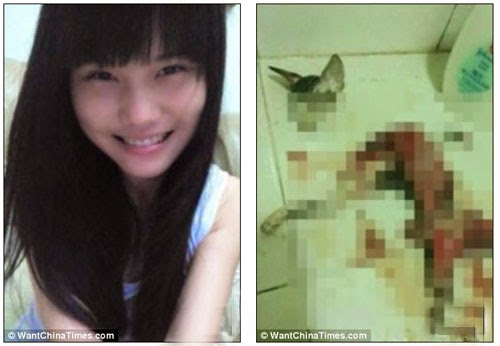 She says she had vented her anger on her cat.  She said the reason was her family had been destroyed by her father's extramarital affair.

She was criticised heavily by other visitors on the website where she had posted the bloody photographs. She was forced into apologising in an open letter.  She said she had abused her cat under the influence of alcohol.

She said she lived in fear and guilt due to the torrent of criticism that she had received.  One user of the website said that she had disqualified herself as being a human being through her behaviour.

It is an extraordinary example of animal abuse. It is totally unimaginable that a person could do this to their domestic cat companion.  There is no doubt that this person disqualifies herself for life from keeping a domestic cat or any other pet for that matter.  As far as I'm aware there has been no prosecution of her and therefore no punishment. Certainly, it has not been reported and as we are well aware China does not have a fantastic reputation with respect animal welfare.

This pretty woman's name is Li Pingping. She used to be a marketing consultant and now works for the Chengzi Culture Communication Company in Huizhou. Shame on you Ms Li. Never go near a cat again for the sake of cats.