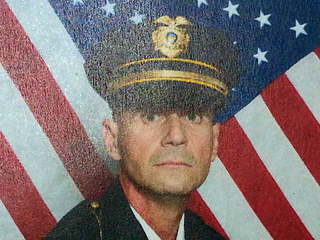 There is a police officer (title: "humane officer" whatever that means - not much apparently) who works in an area around North Ridgefield, Ohio, USA.  About a year ago he shot 5 kittens who were hiding in a woodpile while children watched. The woodpile was in someone's backyard. The whole thing smacks of madness but the officer got away with it.  Nothing happened. The mayor of the city, Mayor G David Gillock, and the police chief, Michael Freeman, both turned a blind eye to this officer's behaviour. The officer's name is Barry Accorti (see photo).

Of course, there was a public outcry but still nothing happened. How many times have you seen that? It doesn't just happen in America. It happens in the UK as well and many other places where police officers do bad thing and nothing happens despite a public outcry. It simply serves to undermine the police force and if you keep on doing it long enough you breakdown the trust between the police and the public.

This is a follow-up post because this completely animal-insensitive police officer has now shot a baby raccoon, which as I understand it, he'd trapped. He shot and killed the baby raccoon in her cage while children watched. He does like to let children watch his cruelty to animals, doesn't he? What in heavens name does he think he is doing?

The well-known cat charity Alley Cat Allies has written a letter to the North Ridgeville Mayor requesting immediate termination of Mr Accorti's employment contract and the dismissal of the chief as well...


“We are also calling for the immediate dismissal of Humane Officer Barry Accorti and Police Chief Michael Freeman......These cruel practices cannot and will not be tolerated,” says Becky Robinson, president and founder of Alley Cat Allies. “The fact that a duplicate incident has arisen, with the same officer—who was, against advisement, permitted to keep his job—and the same supervisor, demonstrates the clear need for real change after last year’s cruel event."

Hands up those people who could shoot a kitten or a baby raccoon at close range with a pistol?  Imagine what it's like when the bullet hits the animal.  Imagine the destruction, the blood, the fear and terror in the other kittens who are nearby, the distress caused to the children who were nearby and the continued desensitisation of the person who did it.  Every time a person does something like this he simply reinforces his insensitivity and so he becomes more and more inured to gross animal cruelty.  This is not the sort of person who should be a police officer and to call himself a humane officer is turning the world upside down. Sack him.
Email Post