Essay on the Scottish Fold (for students)

The first Scottish Fold was found by a shepherd on a farm in Perthshire, Scotland in 1961.  He noticed a white, female barn cat, whose name was Susie, who had ears that looked different.  The ears were folded like those of a puppy.  Other kittens in the litter were normal and as a result the folded ears were thought to be due to a spontaneous mutation. 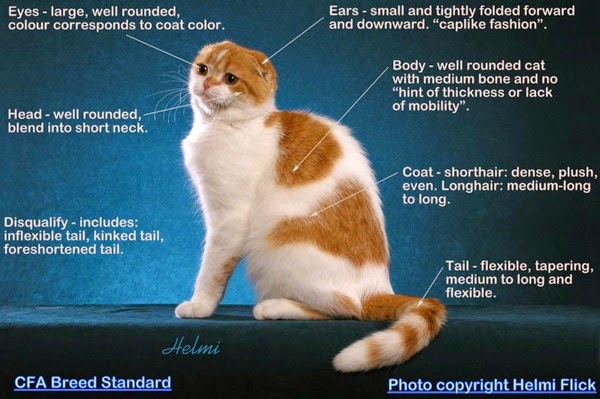 The cat with flat ears was allowed to reproduce and two more folded eared kittens were created; and so a new breed was established.  Initially this new breed had considerable opposition in the cat fancy in England.  The premier cat association in England, the GCCF, would not accept the breed for competition.  Although the Scottish Fold continues to be controversial, it is still quite popular in the United States.  This is a medium-sized cat and you will see this cat in all colours and patterns except chocolate, lilac and, point.

The ears show a definite fold line resulting in a forward fold giving the impression that the cat is wearing a cap on his rounded head.

This cat's eyes are large and rounded which when added to the rounded head and flat ears creates a very cute and kittenish appearance, which has been attributed to this breed's popularity.

Despite being popular, the single dominant gene that causes the Scottish Fold's unusual ears is also responsible for other physical abnormalities, which can occur when the gene is in the heterozygous state but most commonly these problems are manifest and severe in cats that are homozygous for the mutation.

If a couple of Scottish Folds are bred the kittens have folded ears but they are also likely to have fused tail vertebra and abnormal cartilage formation in the joints of the legs and paws.

In homozygotes individual cats these abnormalities can be very severe and cause the cat to be crippled.

Responsible Scottish Fold breeders minimise these physical health problems by always breathing a Scottish Fold to a cat with a normal ear type, which avoids kittens being born with the homozygous combination of the mutated gene.

On a practical level, when the ear flap is folded flat to the head there are other potential issues such as a possible increase in ear infections and the inability to communicate with the ears.  As you are aware, cats communicate with their ears as a form of body language. Sound sensitivity may also be impaired.

The people who support this cat breed maintain that the aforementioned skeletal problems can be prevented with careful breeding practices and that in heterogeneous cats the gene is not detrimental to the cat's health.

Note: this essay is free to use under a creative commons license.