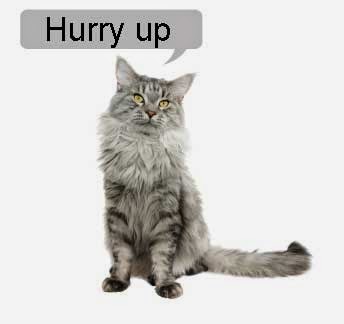 The cat meow might be a learned response to attract the cat's human caretaker's attention.  In other words, the domestic cat learned to meow within the domestic environment as a means to get something.  It was found to be effective which furthered the self-training of this feline vocalisation (this is the "learned response').   The domestic cat meow is not designed to specify a reaction in humans but to provoke the human into action.

You might already know that the cat meow is very rarely heard in cat-cat interactions.  It is far more commonly heard in cat-human interactions.  In a study (Farley 1992) it was found to be possible to train a cat to meow 2 times per minute for a period of 2 hours or more when the cat was food-deprived.  The cat's meow varies in frequency, duration and form quite substantially.  The cat's meow is also modified by other feline sounds such as trills and clicks.

Dr Bradshaw1 says that the cat's capacity to learn that the meow is an effective way to get human attention indicates that it is a product of domestication but he makes the point that the sound itself is not the product of domestication.  I am not sure what he means by that but perhaps it is this. That the domestic cat has the innate capacity to vocalise the meow but learned to use it in the human environment to get attention.

Apparently, the use of meowing as human directed vocalisation is also supported by the fact that domestic cats produce a higher pitched and shorter meow in comparison to feral cats and the wild cat ancestor, the Near Eastern Wildcat. Also the "solicitation" meow is more urgent and less pleasant. I guess it is more demanding.

1. The author of The Domestic Cat; The Biology of its Behavior