It is common knowledge today that the people of Guangzhou Province in southern China like to eat the stray and, I'm sure, the domestic cat.  It is part of their culture.  We have learned that they eat about 10,000 cats per day. Obviously, this is a very large number.

I have also read that because they consume some many cats they have to ship them in from other parts of China. I have read that there are lorry loads of cats coming in from the North.  The same incidentally applies to dogs, to the best of my knowledge. 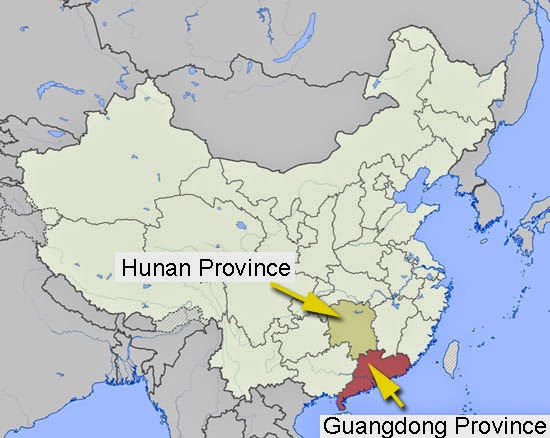 Recently, there has been a report that in Hunan Province which is adjacent and exactly north of Guangzhou Province there is a plague of rats.  We are told that the country suffers from a plague of a reported 2,000,000,000 rats which were displaced by a flooded lake.  I believe that this lake is in Hunan Province. you can see it on the map.

So my assessment of the situation is that in Hunan Province, China they have a plague of rats and they're also shipping cats from that province south to the Province where they love to eat them.  I wonder whether these two events and facts are connected.  Just a thought.

Stray cats will feed on rodents and if you're shipping tens of thousands of stray cats from one area to another it occurs to me that the rat population in the area from which the cats are shipped may increase.  There is no evidence to support what I have stated (as a possibility) but nonetheless it is a sensible deduction.

Ironically, there are now shipping rats to the south as well because in Guangzhou Province the citizens eat anything that moves without compunction and without any regard for any other factors.

The official reason for the plague of rats is a lack of snakes and owls.  Snakes are also eaten in the south and owls are killed for traditional Chinese medicine.  I would like to add the lack of a sufficient number of stray cats in Hunan Province as a more likely reason why this plague of rats exists.

Note: the map is a merged one (by me) of two maps from Wikimedia Commons.
Email Post
Labels: cat meat China stray cats