- May 03, 2014
A Texas veterinarian, Millard Tierce, dubbed the "Vampire Vet" has been arrested after he told the Harris family he was putting down their 4-year-old Leonberger, Sid (a very large dog) only to keep the dog alive for six-months in a cage 24/7 for blood transfusions, meaning he wanted to bleed the dog for blood.  Obviously quite shocking news. 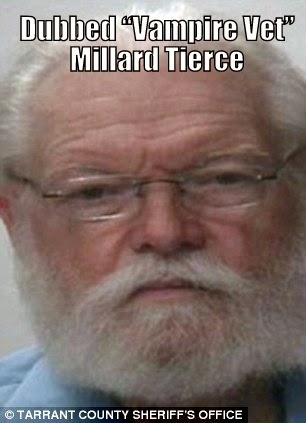 Mrs Harris said that last October she had given the vet permission to euthanise Sid after the veterinarian had told her that her dog was suffering from a congenital spinal disorder.

Last Monday, Mrs Harris received a telephone call from a former employee of Dr Tierce telling her that her dog had been kept alive in a cage for the past 6 months.

Mr & Mrs Harris immediately marched down to the veterinarian's clinic and discovered their dog imprisoned in a pen in a room at the back of the clinic.

They were obviously in shock and their emotions were running high.  There was anger and overjoyed at the same time but they felt a deep sense of breach of trust by their veterinarian.

She had been told by the vet that the dog was terminally ill but when she recovered Sid from his cage he was able to walk and jump into her minivan on his own!

This allegedly wicked veterinarian told a newspaper that Mrs Harris and asked him to euthanise her dog but he could not bring himself to do it.  Nice one, Dr Tierce.

Dr Tierce branded the whistleblower, the former employee who had informed Mrs Harris about her dog, a disgruntled employee who wanted to get back at him.

Those excuses may have worked except for the fact that other horrors awaited police officers who descended on the veterinarians clinic.  Apparently he had kept his own dog alive in the same position in a box on the floor of a room at the clinic since June 2, 2013.  His dog should have been euthanised because the dog was seriously ill with mouth disease, cataracts, degenerative neurological disorder and other ailments.  The dog was also emaciated and had 2 dislocated shoulders. The dog was twitching in pain. Dr Tierce said that he had fed his dog but had withheld medical treatment.  It seems to me that he had been entirely wicked in respect of his own dog.

Officials inspecting the clinic found appalling sanitary conditions, organs kept in jars, unsecured medications and the general mess by the sound of it.  This was a nightmare of veterinary clinic.

They also discovered 5 other pets that this vampire vet had kept in cages for 2 to 3 years.  They were still alive and the vet had accepted them for euthanasia.  He's quite mad if this is true.
veterinarian