I Disagree with Jackson Galaxy On Psychiatric Medication for Cats

I Disagree with Jackson Galaxy On Psychiatric Medication for Cats

It's quite a big deal to disagree with America's top cat behaviourist guru.  My disagreement with him may be because British veterinarians have a slightly different point of view than American veterinarians on the matter of prescribing psychiatric medication for domestic cat behaviour problems. 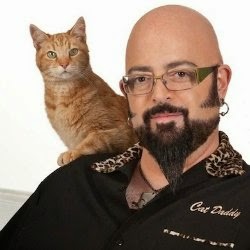 Jackson Galaxy appears to believe that consideration should be given at the outset to psychiatric medication when looking for solutions to what people refer to as "bad cat behaviour".  I make the observation based on an article about treating a cat called "Coco". Galaxy believes that cat behavior problems are caused 50/50 between cat and person. He also believes that drugs have advanced and that it is unfair to withhold psychiatric drugs from cats when they are freely given to people. But they are given too freely to people! I also believe causes are around 80-90 with people.

So the first issue, is whether there really is a cat behaviour problem.  If there is, the next question is whether the problem is due to poor socialisation.  If it is decided that it is then that once again it is a human created problem because it is down to people to ensure that the domestic cat is well socialised. Of course, I am referring to domestic cats born in the family home.  Feral cats will not be well socialised but then feral cats should not be in the family home as domestic cats.  A person should not adopt a feral cat and then drug that cat with the intention of turning him or her into a domestic cat. If a cat is poorly socialised the answer is usually to socialise with extreme patience while avoiding drugs.

If the cat is well socialised but still behaving badly despite excellent cat caretaking within a top-class environment for the domestic cat then the cat's health should be checked out thoroughly.

We are therefore looking at 3 stages before even considering psychiatric medication and these are: socialisation, the environment and interaction with people, the cat's health.

Once all 3 are thoroughly checked out and it is agreed that these areas are in order, I would be extremely surprised is a cat behaved badly.  If the cat's owner still believes her cat is behaving badly then it may well be the case that she has incorrect expectations about cat behaviour. These need to be rectified before considering drugs.

If, and only if the expectations are correct then consideration may be given to minimum doses of some sort of psychiatric medication but let's be clear that medication such as Prozac is not what it has been made out to be.

Reports are emerging that Prozac given to people causes suicidal thoughts and there are many other negative side-effects which undermine benefits to people and therefore its use should be re-evaluated when administered to cats.