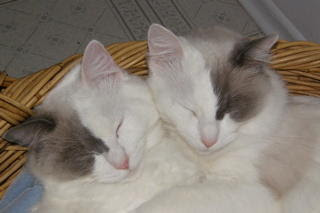 It is not clear if these two lovely and almost identical cats are twins or not. They certainly look like it. They are called Peek and Boo. They are male Ragdoll cats. The breeder is Patricia Day of Tinsle Ragdolls.

The cattery is located in British Columbia, Canada.

These two boys are almost a mirror image of each other in this position and they are naturally very comfortable together.

We know that cats are similar to humans in many respects anatomically. For instance they can get asthma and hay fever like us.

It is quite possible to give birth to twin cats too. But apparently it is unlikely. For cats to be identical twins one egg splits into two, each the same. To be fraternal twins there would be two eggs released and both are fertilized by the same male cat.

A female cat releases multiple eggs. Apparently she releases one egg each time she mates. If the female is feral for example (not the case with Peek and Boo obviously), it is likely that there will be more than one father.

If it is the same male mating more than once his sperm can fertilize more than one egg released. The cats from this fertilization will look the same. Fraternal twins occur when two eggs are fertilized at the same time.

The only way to tell for sure if Peek and Boo are identical twins is through DNA testing. But it is likely that they are not identical twins as being mirror images of each other they are actually different. Peek has dark fur on the right hand side of his face and Boo has dark fur on the left side of his face. This would indicate to me that they are fraternal twins and not identical but I am not an expert. I love this photograph, that is why I made this post.