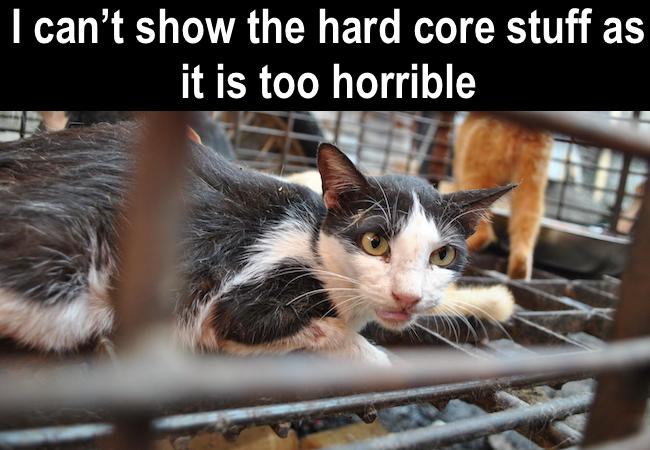 It's cat meat name and shame time. I have made a couple of other posts about cat meat. The sound of the phrase makes me cringe. Why? We eat pigs, chicken etc. Yes, but the killing and eating of farm animals in the West is controlled despite the fact that sometimes breaches of the rules go unenforced. At least there is control and necessity in the consumption of farm animals for food, which cannot be said about the cruel slaughter (or a better description, the partial killing to preserve freshness) of domestic cats. Is the killing of our companion animals (actually we are animals too) endorsed by some governments through their acquiescence in the practice?

I believe that the majority of people feel that it is wrong to eat cat meat and this feeling is not misguided, I believe. This feeling is supported by the philosophy of one of the great men of the 21st century, Mahatma Gandhi, who I have quoted before and why not. His wisdom and humanity is exactly what the world continues to need. He was assassinated on 30th January 1948.

He said this about animals:

{note: Mahatma Gandhi was not a saint. He was wise but he was a human being with the usual weaknesses. I quote him because I feel the quote is appropriate and wise}
Greatness and moral progress are the measures. When we consider how brutally some people in some countries treat cats (and for the time being I will confine myself to cats for obvious reasons), I can only conclude that these countries are not yet great.

A note: Sarah Hartwell (website, Messybeast) disagrees with the criticism of the Chinese and Eastern countries by the West on the treatment of cats for human food. She says Hindus are appalled at how we treat catt 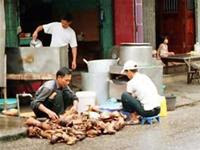 le. A point yes. But a bad one. Hindus think the cow is sacred because it is or was useful. It is a fallacy to think the cow sacred. In any event cows are now ill treated in India, left to wander the roads unsupervised causing accidents.

Listed below are the countries who prepare cat meat and eat it as far as I am aware. I am not saying all the peoples of these counties are morally inadequate, far from it. In fact I will disagree to an extent with Gandhi by saying that the eating of cat meat originates in a lack of education or knowledge. That said education brings wisdom and this brings a higher state of morality, I think it fair to say.

What I am saying is that a culture subsists in these countries indicating a lower level of knowledge by some (perhaps a minority) of the need to respect our fellow creatures, particularly those we keep or kept as companions. Important: this is not a racist attack but a reasoned argument devoid of racial implications:-

China - As I understand it some Chinese people (and I am not talking of all Chinese) think of animals as "moving things" and as similar to a vegetable. They have market(s) where cats are part killed (by hitting on the head for example) to preserve freshness. I don't think that that can ever be supported. Apparently in winter in Guangzhou, 10,000 cats are eaten daily. This seems a lot to me. 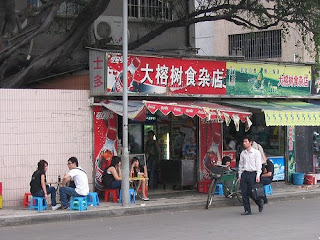 Guangzhou is the capital of Guangdong Province in the south of People's Republic of China. The picture opposite is a side street in this city>>>>>

A restaurant owner there defended his practice of serving cat meat balls by saying it was a tradition. He killed the cats in the street. It was a tradition in the middle ages in England to burn witches but we don't still do it. The point that I am making is that to support what I and many others (including I am sure many Chinese people) consider cruelty to animals cannot be justified on the basis that it is a tradition.

I would like the Chinese government to introduce some laws/regulations to protect animals in China. China wants to be accepted it seems to me (look at the fantastic Olympic Games that they hosted). Please, China, enact some laws protecting your animals and animals in neighboring countries (i.e the Bengal tiger, parts of which are found in Chinese medicine).

Update: Cat meat freshly killed by partially killing then boiling sells for about $1.32 per pound or about $9 for a medium /small cat. They have to ship cats in from the north (Bejing) as they have run out of feral cats in Guangzhou. There was a fairly recent report about protestors stopping of one of the trucks bringing caged cats in (many had died in transit). Some cats were released. There appears to be a gradual movement within China away from this totally uncivilized behavior. Domestic cats are companion animals - come on China get your act together! Cat and animal welfare needs a prosperous democracy.

Some Chinese are beginning to find the gross habit of others of eating cat meat as unnacceptable. I and many other people are very pleased about that but there is a long way to go and China really must start enacting Cat and Animal Welfare Laws. I am pleased to say that cat rescue is China is happening.

Korea - cats are eaten in rural areas. Cat meat named and shamed I am afraid. 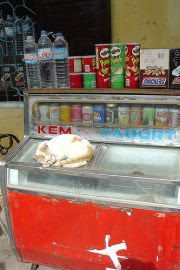 Madagasgar - probably some other medicinal purpose or something odd and unscientific such as good for sexual potency.

Peru - according to the Wikipedia author cat meat is a regular menu item in restaurants, used in stews etc.

Switzerland - we know that Switzerland is a European hub for cat fur so I guess it is no surprise that in some rural areas they eat cat meat. Switzerland - Cat Meat Name Shame (src: Wikipedia®)

There are others I am sure. Update: Kuwaiti restaurant sells cooked cat meat allegedly, passing it off as something else.

I think that we all know that it is wrong. Lets not qualify it and rationalize it. It is in my view barbaric behavior that needs to be rejected with principle and passion. {note: I realise some will disagree and if so please leave a comment - thanks}