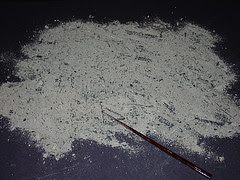 It is all but impossible to find out what Cat Food Ash is. There are articles on it but they are contradictory.

We know cat food contains ash, but why? We also know that ash is the particles (I think it's carbon particles and other particles, such as inorganic matter - see below) left over after something has been fully burnt.

We also know that ash is not added to cat food (why should it be) - so why is it listed? Ash is commonly listed under Analysis on the packet of cat food. Interestingly the word "ingredients" is not used. Why can't the manufacturers use the word "ingredients" and then tell us what ash actually is? Answer: to make the whole thing gray and vague. I'm not saying it's done to confuse us though, just make it more difficult to understand.

The most normal answer that I have found on the Internet as to what ash is, explains that cat food is cooked at high temperatures leaving some ash which is made up of minerals. In other words a small proportion of the organic matter (the flesh and bone etc.) is burnt (when cooked) leaving stuff that doesn't burn, minerals.

The other answer that I have found is that when the cat food is analyised it is burnt and the ash that is left over contains minerals (or is entirely made up of minerals - not sure which). This tells us how much in the way of minerals are in the cat the food. But if this is the case why can't the manufacturers simply say "minerals" on the packet and then list the minerals?

Conclusion: Ash is, I believe, minerals. Minerals are inorganic matter, which in turn are substances not based on carbon but of mineral origin (definite chemical composition and a crystalline structure). An example of inorganic matter that is a mineral would be Graphite or Copper Citrate.

Moving on, why is it in cat food? Do cats need minerals for health? The answer is yes, all animals need traces of minerals in their body for its proper functioning. Metals come in mineral form such as mentioned above, Copper Citrate. Iron is needed in the blood as it is necessary for the production of hemoglobin, another example.