- March 17, 2008
The Bengal Cat used to be the exotic cat. There was a fascination with the idea of creating a hybrid by mating a wild cat with a domestic cat; bringing the wild into the living room. Cat lovers could have a little bit of nature in their home. Humankind has always struggled to master nature. Nature will always have the upper hand. Here, though, was an example of humankind mastering nature, manipulating it and controlling it by creating in, an almost god-like way, a sociable, socialized cat with a streak of wild nature locked within him, coursing through his veins.
The Bengal cat was and still is full of "bling" and zing. This cat is very inquisitive - that comes from the wild cat in him, the need to be alert and on guard to successfully survive. It also demonstrates intelligence and finely honed senses and skills. That said all domestic cats have fantastic senses that we can only dream about. Bengals are very athletic and can move quickly. They can be found perched up on high. I am thinking of photographs that I have seen of a Bengal cat on top of a door (or in a Christmas tree). That's the wild cat in him again - great climbing skills.

The Bengal cat is a cat that made a big impact when the breed was developed back in the 1970s. At that time there was a fascination with the early offspring, called F1 and F2s, the first and second generations from the wild leopard cat. The question was, what kind of cat was this? Well, a pretty normal cat really. Although the male F1-F3 are sterile.

The early days raise some questions of ethics to be honest. We know Jean Mill had the vision to create and develop this massively popular breed but she started in a way that calls into question some finer points of the rights and wrongs of human behavior. She is revered and has just retired. Whatever the good and bad of her program, pushed the correct buttons in terms of commercial success.

To me, the Savannah has taken over the mantle of the number one exotic cat (and there are many, including, for example, the Toyger, and Chausie). The Toyger has no wild blood while the Chausie is a classic wild/domestic hybrid; but both to me could be classified as exotic. Why? - because of their appearance. Both reflect the wild cat appearance, the Toyger a mini-tiger and the Chausie the Jungle cat.
F1 Savannahs are mightily impressive, large cats with the phrase, "I am all cat", written all over them. This is a highly commercial cat too, being "transformed" into the Ashera GD, the hypoallergenic wild cat hybrid from LifeStyle Pets (Allerca Cats). Is the Ashera GD a F1 or F2 Savannah? Don't know but probably yes.

I mention the Savannah as the Bengal cat has now become more of a standard domestic cat. The breeding program now is to mate Bengal with Bengal cat. But has the program gone wrong? I had thought that Bengal cats where free of genetically based illnesses. But apparently not. In the cat fancy we know that the gorgeous Maine Coon (what a tragedy) has a high incidence of the heart disease called HCM (causing thickening of the heart wall). This potentially fatal condition now haunts the Bengal cat breeding fraternity. How prevalent is it? - we don't know. But it is, it seems, fairly widespread.

This is really hurting the breeding program. Getting real again - I can't help but think that this is a result of Bengal Cat breeders not keeping their eyes on the ball and the wider issues. I am sure that the wild ancestor t 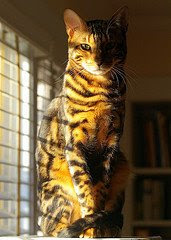 o this breed does not suffer from HCM so the condition has been "bred and spred" in effect by breeders who have sadly been less than watchful. There is also of course the motivation to keep problem areas quiet, in the breeding program. This is good commercially on a short term basis and profoundly bad for all and in every respect on a long term basis.

The pain that can be caused to an adopting family when their cat dies prematurely of an illness such as HCM is unpleasant to say the least. Most importantly though is the cat; we shouldn't be bringing cats into the world that have a fatal medical condition. We shouldn't even take the risk of bringing a cat into this world with such a condition. There are though many fine Bengal Cat breeders. Here's one and here's another.

Despite all that, this cat is hugely popular and there are many well known personalities who keep this breed of cat, Justin Hawkins and Jemima Khan are two examples. It isn't just the flashy coat, be it spotted or marbled or whether she has glitter or not. It's the personality that really counts.

I can remember making a video of my neighbors Bengal, Daniel. He is about twice as alert as my girl moggie and three times as quick. But he doesn't like his space invaded - check out the video to see what I mean. 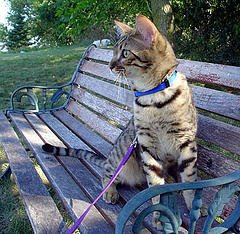 Shocking to me is the fact that there are many wonderful Bengal cats that are abandoned by people who have probably found this cat a bit of a handful. Moral - you'll need to be a cat lover and be able to provide input and have some space to keep a Bengal cat. Ideally and this is by far the best solution, I think, you should have the means and space to build a substantial enclosure fully Bengal proof. That will bring peace of mind for you and contentment for him. Indoor cats are safest. Another option that comes to mind is leash training. Bengals are OK I understand for leash training (i.e. more trainable than a typical mixed breed cat). But you can't beat a nice big enclosure.

There is still far too much cat cruelty in the world. Some people hate cats (and I hate them). Some eat cats (shame on them). There is too much danger out there for domestic cats. We made a dangerous world for them, I am afraid.