One domestic cat that is an intelligent cat breed is the Chausie. This is a cat that is similar in appearance to the Abyssinian as she is a wildcat (Jungle cat)/domestic cat (Abyssinian) hybrid. Indeed the Jungle cat is similar in appearance to the Abyssinian so they are perfectly matched. The intention is to produce the look and physical attributes (to a certain degree) of the wild cat with the socialization skills and personality of a domestic cat. This is the objective for all breeds of this type.

At the first generation level hybrids such as the Chausie can be a bit of a handful.

My research indicates that all cat lovers thinks that their cat is an intelligent cat breed. My research also indicates that of all the cat breeds it is the wildcat/domestic cat hybrids that are more likely to be more intelligent, on the face of it. But let's be honest it is all guesswork.

We are not conducting scientific tests. It is simply that people who have lived with certain cat breeds (and there aren't many who have lived with wildcat/domestic hybrids) are able to make a gut feel judgment about intelligence which is supported by the behavior of the cat, for example, if the cat is easier to train or dog-like in behavior. Some intelligent cats learn from the person keeping the cat and can become a little sneaky - a demonstration of intelligence. There you have it - an intelligent cat breed. If you were searching for one your search is over. It is advisable to read about Helmi's experiences of living with a Chausie - they are enlightening.

The other wildcat/domestic cat hybrids are the Bengal and the Savannah. The Safari and Serval are tamed wild cats. They're smart too.

Update: I was going to leave it there but since posting this I have noticed the Wikipedia article on cat intelligence. This is a nicely written article but all it is saying is that th 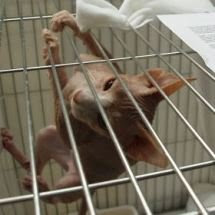 ere are no scientific certainties as to the most intelligent cat breed. I agree with that and have used experience gained through reading many articles from breeders and cat fanciers to gauge that it is the wildcat hybrids that at least give the impression to us that they are more intelligent.

It is, however, worth remembering that the variation between individual cats in intelligence will be greater than between breeds. We don't, after all, normally think of a nation of humans as being more intelligent than another.

That said, I have met and seen a Sphynx boy cat (a young cat) at a cat show and I sense that the Sphynx may be more intelligent than some other cat breeds. He was very active, alert and climbed the cage like a monkey literally, using those long limbs and fingers to clamber all over the place. It is perhaps the degree of inquisitiveness and alertness that indicates intelligence. This is demonstrated by the wildcat hybrids and by Casper the Sphynx cat in the photograph above (copyright Michael at Pictures of cats.org).

There is also the alpha male and alpha female indicators. I think that cats that are inclined to be alpha cats will generally be more intelligent. They have to be to be alpha cats. Once again the wildcat hybrids have this propensity.

From Intelligent Cat Breed to Chausie cat breeders
By Michael Broad at March 23, 2008