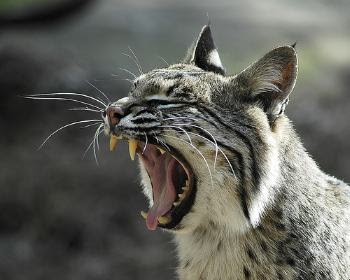 Some examples of recorded matings between the Bobcat and domestic cats producing American Bobcat Hybrids:

1954 - South Dakota, mating between a Bobcat and black female domestic cat. Allegedly, 7 kittens born but only 3 can be attributed to the mating it seems. The kittens had tufted ears, bob tails and large wild cat feet.

1980s - Claimed by some that the original domestic American Bobtail was a cross between the American Bobcat and a domestic cat. No genetic evidence. Apparently Siamese females were the preferred mate for the Bobcat. This must have been the Traditional Siamese.

The fact is that, understandably, cat breeders will create an interest in the cat they are breeding, which is more easily achieved if it can be claimed that the cat is a wild cat/domestic cat hybrid. This seems to have been the case with the American Lynx and Desert Lynx but no genetic markers have been found.

There are other cats where the origin of the breed has been associated with a "discovery" in wild and exotic places. The evidence to support these discoveries is thin. Examples that comes to mind are the Sokoke and the Abyssinian.

From American Bobcat Hybrids to Pixie-Bob
By Michael Broad at March 08, 2008