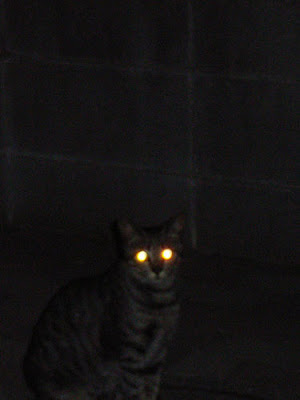 The science behind cat's eyes is helping whales.

In the UK the term "cat's eyes" refers to the reflective glass balls inside metal bases in the center of the road to mark out the center of the road. They were very common at one point. I'm talking about the 1950s to 70s. They are still seen but much less so. They were invented by a Yorkshireman who became a millionaire as a result of the invention. However, he refused to change his simple lifestyle (sounds a bit like a Yorkshireman) except he liked televisions and had a large number in his modest house. That was the extent of his extravagance. This was the era of the introduction of color television so perhaps he bought several of them.

He got the idea for reflective glass balls from cats. We all know how a cat's ey 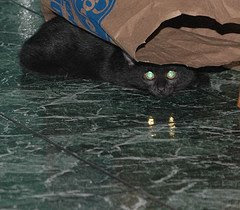 es reflect light in the dark. I explain this anatomical phenomenon on this page.

In new science recently revealed, scientists have built an underwater device that reflects back a tuned signal including sonar. Dolphins and whales produce sonar-like signals. If this device is placed on obstructions such as nets then a whale should pick up a reflected signal from the sonar telling the whale where the object is so that it can be avoided.

Oil and cable companies can use the device to mark out underwater structures. Its great benefit is that it is a passive device which does not require powering up with batteries. This makes its life underwater much longer and easier to manage.

It is nice to see the "technology" behind a humble cat's eyes being used to benefit other animals, particularly endangered animals. We can learn a lot from a cat's anatomy as their senses are very fine. We can also learn from their behavior. Such patience and naturalness is humbling.

bottom - copyright Stigs - what is interesting about this photo is that there is a reflection in the shiny floor of the cats eyes. First time I have seen that.