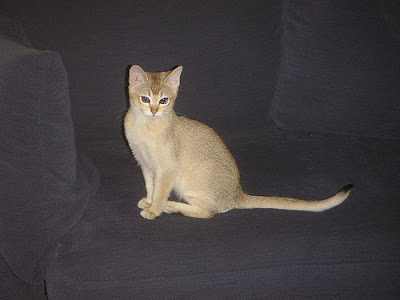 The Burmilla is a cat breed that I had not heard of until I built the pictures of cats website. It is a rare cat but then again so are a lot of the purebred cats.

I have covered the origins. What about the appearance of this cat? We know the founding cats are Burmese and Chinchilla. The Chinchilla is in fact a Persian cat with a particular coat type.

It is interesting to consider which genes the Burmilla inherited from each founding cat that are presented in the Burmilla's appearance.

The Chinchilla gave this cat its silver shaded coat by way of the dominant silver (I) gene. This cat also inherited the Agouti (A) gene from the Chinchilla. The Agouti gene produces the tabby pattern seen so commonly on a wide range of purebred and mixed breed cats and also wild cats. It provides good camouflage for wild cats. The Agouti gene gives the Burmilla its tipped coat but the tabby markings fade apparently.

The recessive longhair gene is carried by first generation Burmillas. This gene may make its presence manifest later on. This gene is not welcome and breeders try to breed it out of their lines. The cat in picture above presumably reflects the presence of this gene.

The Burmese contributes the dominant short hair gene and the recessive Burmese gene. Breeders strive for a situation in which both copies of the gene for short hair are present (homozygous) as this a short haired cat. Homozygous means having identical alleles for a single trait. 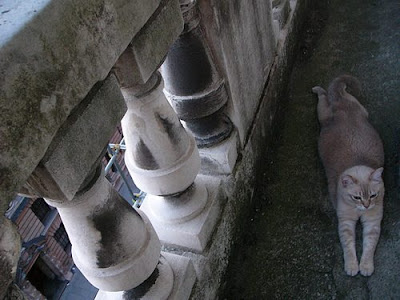 Here is a summary of the breed standard:

This cat is medium sized. She should have a good contrast between the silver base color and the shading/tipping. She is of "foreign type". Foreign type means a cat with modified wedge or wedge shaped head, large ears, oval or almond shaped eyes, long body with legs in proportion to body length, slim, fine boned, long and tapering tail. Elegant. Greater depth of flank than in Oriental type.

The Abyssinian and Russian Blue are examples of foreign type. Foreign type cats have wedge shaped heads, large ears, long bodies. They are elegant in appearance and fine boned.

The head is a short blunt wedge. The eyes are large and "expressive". Green or amber (in Reds, Creams and Torties) are accepted. The coat is short, silky and smooth. It is also dense with an undercoat. The tabby markings are faint on the forehead. These markings may also be on the legs and tail (shaded Burmilla).