March 28, 2008
Burmilla Origin and History -- I'll open up with a post on the origins and history of this cat in a style that I hope suits visitors. There is often a lot written on the Internet but for me in any event a lot of it is a little verbose. Here's the history in detail of the Burmilla:

1981 - Miranda Bickford-Smith buys a Chinchilla Persian for her husband. The cat's name is Jemari Sanquist. 1981 (early) - Before Jerami is to be neutered he meets by accident a lilac Burmese female (not sure where this happened) called Bambino Lilac Fabergé. One website says that both the Chinchilla Persian and the Burmese female were waiting to be breed in the same building ("nearby rooms"). A cleaner inadvertently left the door (doors?) open and voila. Sounds a bit hazy that.

1981 - September 11th - Four black shaded silver females born to the above accidental mating. They quickly developed a foreign type and a short dense coat. Thérèse Clarke (who recounted the story in detail and from which in part this post is taken) says that she was impressed by two of the offspring, Galatea and Gemma. Three things struck Thérèse, their type (required appearance for a breed), temperament and "spectacular" look. These factors prompted Miranda and Thérèse to start a cat breed.

1981 - Jemari Sanquist (the original Chinchilla Persian) was then mated with another of Miranda's Burmese queens (breeding female cat). 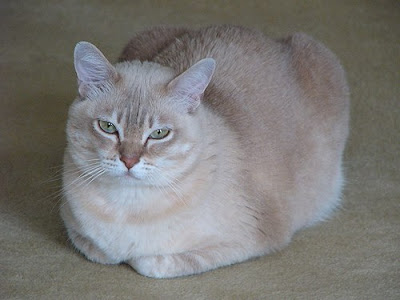 1981 - 27th March - A single male was the result of the mating. His name, Jacynth. He was to join Gemma later and together they founded the Kartush line (the breeding line founded by Thérèse).

{Note: the hybrid created by mating a Chinchilla and Burmese will result in silver cats with shorthair. These cats will carry recessive genes that may present their phenotype. These genes are the Burmese "self" gene and the Chinchilla longhair gene - "self" means a solid color -Burmilla Origin and History}.

1983 - It was agreed between the founding Burmilla cat breeders, Miranda and Thérèse that they would develop the breed in different ways. Thérèse focusing on the Burmilla as seen in Gemma and Jacynth (the founding cats) within the Cat Association of Britain (wound up 2004) and Miranda developing the "Burmilla and its related breeds" within the GCCF.

1994 - FIFe recognize Burmilla and breed standard drafted (not sure when)

Sources: The Enchanting Story of the Burmilla By Thérèse Clarke and other websites

Burmilla Origin and History to Pictures of cats home page