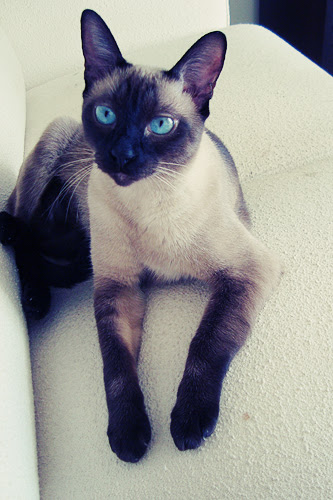 Lovely Lila, a photo by fofurasfelinas on Flickr.
This is another smooth, cool and elegant photograph of a seal point Siamese cat in Brazil by Gaine Portal - Flickr name fofurasfelinas.

The photograph captures the elegance of the Siamese cat. The mood really is in harmony with the cat breed. Everything is right about this individual cat for me - moderate in all ways and very elegant. This cat looks like a Thai cat (classic Siamese).

I expect to see a film star about to step in for the next shot. And the Siamese cat is well known as being a cat breed that is favored by film stars because it was and still is an exotic cat. See a page on the Siamese cat and film stars.

Once in the late 1800s and early 1900s it was a rare cat in the West. The wildcat hybrids have taken over the role of exotic cats in the 21st century.