How to deal with the feral cat problem?

The dilemma that is the US feral cat - the feral cat problem - is a mighty hard one to fix if you just look at it in the short-term and if you just focus on the cat. It is also hard to fix it if you are plain stupid!

I sense that there is a certain amount of unfocused and slightly desperate thinking going on which is throwing up bad decisions and unworkable ordinances. The intentions are often good - how to reduce the feral cat population humanely - but either city councils are paralyzed into indecision or they dive into decisions that are unpopular. There appears to be a sense of confusion too. 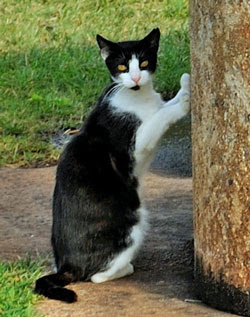 In North St. Paul, Minneapolis we have an obviously sensible and decent couple (Doug and Annette Edge) being accused by their local police chief, Capt. Dustin Nikituk, of breaking the law. He misguidedly says that they are breaking the law when they trap feral cats, take them to be sterilized and vaccinated before returning them (classic TNR). He says that they became "owners" of the cats and therefore need a license. And in owning cats they can't let them run around the neighborhood (i.e. on releasing the feral cats) so they have committed another offense. He is supported by "city officials".

The police and officials are being very foolish. It's a question of common sense, surely? This good couple, through their actions, are declaring that they have no intention to own the feral cats they assist. There have no desire to own these cats because they quickly return them to the wild. Their behavior in relation to the feral cats is not consistent with "ownership". Their actions are a temporary possession of the cats to assist in their welfare - no more. That is obvious.

The city officials and this stupid policeman are getting in the way of a free service that benefits the city. Wake up, please.

More confusion in Columbia. The city councilors want to do something about "the feral cat problem". They want to do something sensible. But they are considering introducing a law that will also stop volunteers providing a free service in trapping and neutering feral cats. This is because their regulations will prove to be too expensive for people to comply with.

City officials should leave good people alone to get on with mopping up the effects of poor cat ownership while introducing laws that encourage people to become better cat caretakers. This will eventually solve the dreaded feral cat problem in the very long term. This has to be a long term program.