Get a boyfriend who likes cats

Elisa recently posted an article about Domestic Abuse and Pets. This is an important article because, as she says, it is quite commonplace.

However, another reason might be that men are jealous of their girlfriend's cat! This may sound a bit far fetched but I feel it is correct. This is not the only reason for hurting the cat but it is certainly one strong possibility.

Women become very attached to their cats (men too, in fact). And cats are better behaved than men! They are more reliable. They are always there for you and no problems. There is a calm predictability and gentleness about a relationship with a cat that a woman cannot find with a man...but there are somethings that cat's can't do....

If a relationship between a man and a woman begins to break down, the woman might seek solace in her cat companion. A perfectly natural thing to do, but it exposes and highlights the dysfunctional male's inadequacies.

This will wind-up Mr. Dysfunctional and Mr. Angry and bingo...you have violence against the woman's cat companion. 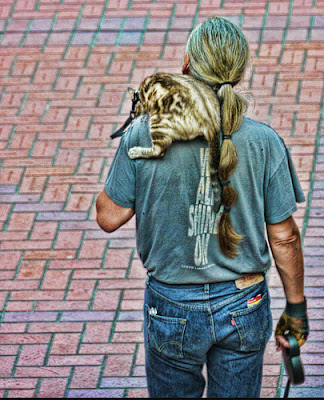 Cats are a competitor to the boyfriend. If the boyfriend does not like cats - and the male human is less likely to like cats than a woman - the cat may be the cause of discussion or argument. "You prefer your cat to me!" Answer, "Yes, he is better than you".

If a woman loves cats and is a cat guardian she should make sure her boyfriend likes cats too. If not dump him quick. A boyfriend who likes cats will be a better person anyway.