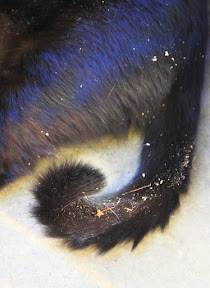 The cat's tail is something to watch. The tail does so many things. We are still studying it. Of course, true cat lovers know a lot about their cat's tail! They know their own cat's brand of sign language.

Although people have different ideas what tail movements mean. Perhaps cats being the individuals that they are, they use their tail in different ways. No one has discussed that or done work on it.

One tail movement that seems to result in different interpretations is the swishing movement from side to side. My lady cat does this when she is on the lawn looking at a bird. Some people think that this is a sign of aggression. Desmond Morris, an eminent scientist, says it is a reflection of doubt and uncertainty or "acute mental conflict". The cat wants to prey on the bird but the open ground of the lawn that provides no cover holds her back.

Scientists have studied the tail up in the air position when domestic cats meet. The tail up is a signal of communication. The cat with the tail up is probably a lower ranking cat in the hierarchy and the tail's position sends the message that the meeting is amicable.

Cats use their tail to touch us. Our cat glides past us and touches our legs with her tail. This I presume is scent exchange and a friendly greeting and confirming our position in relation to the cat - a reassurance for the cat.

In this video of Magic waking up Andreas you can see her use her tail to exchange scent and touch Andreas. This is a beautiful greeting accompanied by copious head butting (also scent exchange).

I have noticed the tail-flick-and-skin-ripple combo. This happens when my three legged cat doesn't like the food that I have given him! It must be a sign of being unhappy with the situation. "What, you expect me to eat this!?"

When you talk to a domestic cat and you think that they are saying nothing in response - think again! Watch that tail wave around delicately and slowly, saying that I am listening. It's all about cat body language.

To the wild cats. The magnificent snow leopard has a tail like thick ship's rope but a lot prettier. It is long and strong and it acts as a balancing device while this fabulous wildcat negotiates the 40° rocky slopes in the high mountains that are its habitat.

The margay is a small wildcat that is probably the world's best cat climber (it is sometimes domesticated). It lives in the forest trees and uses its tail for balance. The same can be said of the clouded leopard; another tree dwelling cat.

On the ground, the long tail of the cheetah swishes and waves from port to starboard as it races after its prey. It too aids balance during those twists and turns.

I have only touched on the many aspects of the cat's tail. Watch is, study it. It is a fascinating piece of cat anatomy.