The Siamese cat is known for its squint (cross-eyed appearance) almost as much as it is famous for its pointed coat. Or am I being unfair? The squint is considered by some as a breed characteristic. You will rarely see it, I suspect, in purebred cats because of careful selective breeding but you will probably see it in feral Siamese cats.

The cause of the squint has been extensively researched by scientists judging by the number of published research studies listed under a Google Scholar search enquiry.

The first one listed is entitled: Aberrant visual projections in the Siamese cat. This article says that there is a "neuroanatomical defect in the primary visual pathways" of the Siamese cat.

says that the cross-eyed problem is caused by "a disrupted visual pathway in some strains of Siamese". However, the authors say there is no solid evidence that establishes that the Siamese as a breed carries this defect.

As I understand it, the squint does not adversely affect binocular vision as it is a compensation for another problem. There are two anatomical problems one cancelling out the other. I may have that  wrong however.

Apparently a kitten may have a "mild squint" that corrects itself when older. Older cats might therefore be asymptomatic carriers of the gene that causes the squint. This must make it harder to remove from breeding lines I would have thought.

More research is needed to establish the way this condition is inherited. It may be caused by two or more genes.

Here is another Siamese cat squint: 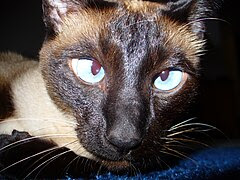 Read a lot about Siamese Cat Health generally.
By Michael Broad at July 15, 2011